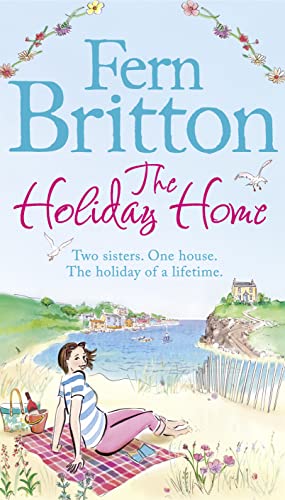 The Holiday Home
by Fern Britton

The Holiday Home by Fern Britton

Two sisters. One House. The holiday of a lifetime...

Set on a Cornish cliff, Atlantic House has been the jewel in the Carew family crown for centuries. Each year, the Carew sisters embark on the yearly summer holiday, but they are as different as vinegar and honey.

Prudence, hard-nosed businesswoman married to the meek and mild Francis, is about to get a shock reminder that you should never take anything for granted.

Constance, loving wife to philandering husband Greg, has always been outwitted by her manipulative sibling. Suspecting that Pru wants to get her hands on Atlantic House, Connie won't take things lying down.

When an old face reappears on the scene, years of simmering resentments reach boiling point. Little do the women know that a long-buried secret is about to bite them all on the bottom.
Is this one holiday that will push them all over the edge, or can Constance and Pru leave the past where it belongs?

Pendruggan: A Cornish village with secrets at its heart

"This is a light-hearted, fun and easy read..." Daily Mail

`Complicated friendships and tales of a chaotic love life make this a must-read.' Woman

`A light-hearted, fun read that perfectly captures the sights and smells of village life.' Heat

Fern began her career as a television presenter in 1980 after completing a stage management course at the Central School of Drama. In 1985 Fern became the presenter of the popular Coast to Coast, which lead to presenting roles on prime time television shows, the most iconic of which was on ITV's flagship show This Morning. Fern's warmth, humour, empathy and compassion have made her incredibly popular and she has become a much sought after presenter. In 2008 Fern released her autobiography Fern: My Story, which was a huge bestseller. Fern is deeply committed to a number of charities, in particular those working with and for women, children and childbirth. She lives with her husband Phil Vickery, the well respected chef, and her four children in Buckinghamshire.

GOR004692166
The Holiday Home by Fern Britton
Fern Britton
Used - Very Good
Hardback
HarperCollins Publishers
2013-05-09
368
0007468539
9780007468539
N/A
Book picture is for illustrative purposes only, actual binding, cover or edition may vary.
This is a used book - there is no escaping the fact it has been read by someone else and it will show signs of wear and previous use. Overall we expect it to be in very good condition, but if you are not entirely satisfied please get in touch with us.