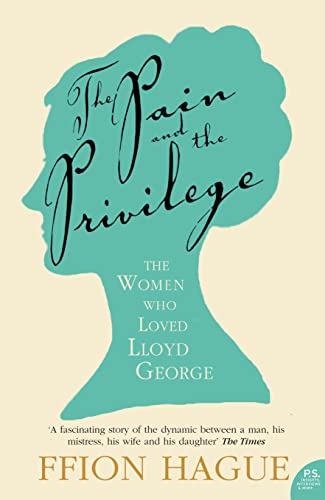 The Pain and the Privilege
by Ffion Hague

`Men's lives are a perpetual conflict. The life that I have mapped out will be so especially - as lawyer and politician. Woman's function is to pour oil on the wounds - to heal the bruises of spirit...and to stimulate to renewed exertion.'

The Pain and the Privilege Summary

The Pain and the Privilege: The Women in Lloyd George's Life by Ffion Hague

`Men's lives are a perpetual conflict. The life that I have mapped out will be so especially - as lawyer and politician. Woman's function is to pour oil on the wounds - to heal the bruises of spirit...and to stimulate to renewed exertion.'

Lloyd George was a man who loved women and the tale of his intertwined relationships contains many mysteries and a few unsolved intrigues. He was involved in a divorce case early in his career, fought two libel cases over his private life and had persuaded the prettiest girl in Criccieth to be his wife. Lloyd George's life was indeed a `perpetual conflict'. He was a habitual womaniser and, despite his early, enduring attachment to Margaret Owen, marriage did not curb his behaviour. There were many private scandals in a life devoted to public duty.

Ffion Hague illuminates his complex attitude to women. Her own interest stems from the many parallels in her own life.

The Pain and the Privilege Reviews

`A riveting narrative examination of the dynamic between a man, his mistress, his wife and his daughter. Played out behind the doors of Downing Street, it throws light on the depth of ambition of one of the 20th century's great political machinators...a fascinating story.' The Times

`Fluent, balanced and broadly sympathetic...where Hague does have both a new persepective and new material is in her treatment of Margaret Lloyd George, reclaiming Margaret as a significant political figure.' Independent

`Hague has much to bring to the task of recovering their stories including her knowledge of the Welsh language and culture, an accessible style, and a sympathetic appreciation of "the pain and the privilege" of being married to a prominent politician...compelling.' Literary Review

Ffion Hague was born in Cardiff. A native Welsh-speaker, she studied English Literature at Oxford and then took an MPhil in Eighteenth-Century Welsh Poetry at the University of Wales, Aberystwyth. After graduating a second time, Ffion joined the Civil Service and was posted to the Welsh Office. She held a number of policy positions before being appointed Private Secretary to the Secretary of State. On leaving the Civil Service, she became Director of Operations at the business-facing charity, Arts & Business. In 2000, she became a headhunter and since 2003, has been a director of Hanson & Green. Ffion was a trustee of The British Council and also a judge of the Orange Prize for Fiction in 2000. She is married to William Hague and lives in Yorkshire.

GOR010529053
The Pain and the Privilege: The Women in Lloyd George's Life by Ffion Hague
Ffion Hague
Used - Like New
Paperback
HarperCollins Publishers
2009-04-02
416
0007219504
9780007219506
N/A
Book picture is for illustrative purposes only, actual binding, cover or edition may vary.
The book has been read, but looks new. The book cover has no visible wear, and the dust jacket is included if applicable. No missing or damaged pages, no tears, possible very minimal creasing, no underlining or highlighting of text, and no writing in the margins.