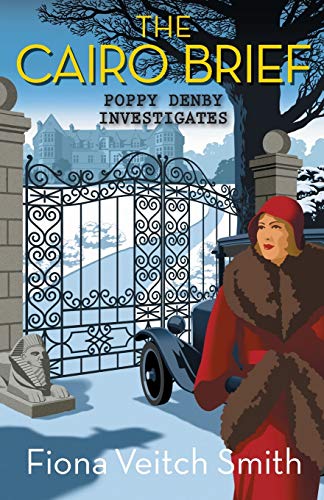 Used Price
£6.49
Free Shipping in the UK
In Egypt a tomb is opened. In London a curse is unleashed. Poppy Denby Investigates.
Reviews:
Trustpilot
Very Good

Intrepid reporter sleuth Poppy Denby is invited to attend the auction of the Death Mask of Nefertiti. The auction is to be held on the country estate of Sir James Maddox, a famous explorer and Egyptologist. Representatives of the world's leading museums will be bidding on the mask which was found, in Egypt, under murderous circumstances. Poppy and her colleagues from The Daily Globe, who are trying to stay one step ahead of their rivals from The London Courier, dismiss rumours of an ancient curse. But when one of the auction party is murdered, and someone starts stalking Poppy, the race is on to find the killer before 'the curse' can strike again.

"Poppy Denby is on top form solving the mystery surrounding the ancient Egyptian mask of Queen Nefertiti. Highly recommended!" Dolores Gordon-Smith, author of the Jack Haldean murder mysteries
"Intrepid Poppy Denby visits a country estate not unlike Downton Abbey in this caper. It's great fun following Fiona's crew of early 20th-century reporters as they seek scoops and solve murders on the side." Deb Richardson-Moore, author of The Cantaloupe Thief, The Cover Story and Death of a Jester
"Thoroughly enjoyable mystery. Murders, sinister figures, a cursed Egyptian mask - and a seance! All the ingredients for another superlative Poppy Denby investigation." A. J. Wright, award-winning author of the Lancashire Detective series
"Fiona Veitch Smith, where have you been all my life? Poppy Denby is delightful, the plot rocks, and the 1920s era is perfectly evoked. British mystery fans, you want to read this. You really, really do." Cassandra Chan, author of the Bethancourt and Gibbons mysteries

Formerly a professional journalist, Fiona Veitch Smith is now an author of books for adults and children. She has also written theatre plays and screenplays. Her adult mystery series, Poppy Denby Investigates, set in the 1920s, is published by Lion Fiction. The first book in the series, The Jazz Files, was shortlisted for the Crime Writers' Association (CWA) Endeavour Historical Dagger award, 2016. Other titles in the series include: The Kill Fee, The Death Beat, and now The Cairo Brief. For more on the Poppy Denby Investigates series including background material on the 1920s, film reels, period fashion and fabulous jazz recordings check out the Poppy Denby website: http://www.poppydenby.com/. Interested in learning more about Fiona, take a look at her website: http://fiona.veitchsmith.com/.

GOR009740884
The Cairo Brief by Fiona Veitch Smith
Fiona Veitch Smith
Poppy Denby Investigates
Used - Very Good
Paperback
Lion Hudson Ltd
2018-09-21
352
1782642498
9781782642497
N/A
Book picture is for illustrative purposes only, actual binding, cover or edition may vary.
This is a used book - there is no escaping the fact it has been read by someone else and it will show signs of wear and previous use. Overall we expect it to be in very good condition, but if you are not entirely satisfied please get in touch with us.