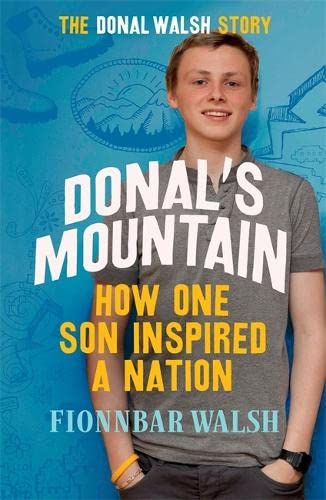 'It's not often you sit beside a sixteen-year-old boy and feel in the presence of greatness but that's what it was like for me with Donal Walsh' Paul O'Connell, rugby player

Donal's Mountain: How One Son Inspired a Nation by Fionnbar Walsh

'Donal Walsh was able to see the beauty in life. He spent his valuable time helping us to open our eyes' Cecelia Ahern, author

Sixteen-year-old Donal Walsh came to national attention when he spoke out about suicide in young people in an RTE television interview and, later, in an article which appeared in a national newspaper. At the time, Donal was dying of cancer. He wanted others to see that death is never an answer. A few short weeks later, on 12 May 2013, Donal sadly passed away.

Here, in this heart-breaking but ultimately inspirational memoir - written by his father and including Donal's own words - we are given an insight into an extraordinary young man who, in coming to terms with his own death, became determined to open people's eyes to the beauty that surrounds them in life.

All Donal asked before he died was that his parents continue to spread the message of living life.

Fionnbar Walsh is married to Elma Walsh and father of Jema and Donal. He lives in County Kerry.
GOR006173415
9781444794861
1444794868
Donal's Mountain: How One Son Inspired a Nation by Fionnbar Walsh
Fionnbar Walsh
Used - Very Good
Paperback
Hachette Books Ireland
2014-05-02
320
N/A
Book picture is for illustrative purposes only, actual binding, cover or edition may vary.
This is a used book - there is no escaping the fact it has been read by someone else and it will show signs of wear and previous use. Overall we expect it to be in very good condition, but if you are not entirely satisfied please get in touch with us
Trustpilot