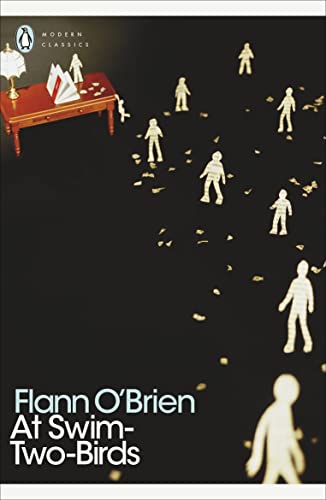 At Swim-two-birds
by Flann O'Brien

Used Price
£5.49
New RRP £9.99
Free Shipping in the UK
The undergraduate narrator lives with his uncle in Dublin, drinks too much with his friends and invents stories peopled with hilarious and unlikely characters, one of whom, creates a means by which women can give birth to full-grown people.
Reviews:
Trustpilot
Very Good Good Well Read

At Swim-two-birds by Flann O'Brien

Flann O'Brien's innovative metafictional work, whose unruly characters strike out their own paths in life to the frustration of their author, At Swim-Two-Birds is a brilliant impressionistic jumble of ideas, mythology and nonsense published in Penguin Modern Classics.

Flann O'Brien's first novel tells the story of a young, indolent undergraduate, who lives with his curmudgeonly uncle in Dubin and spends far too much time drinking with his friends. When not drunk or in bed he likes to invent wild stories peoples with hilarious and unlikely characters - but somehow his creations won't do what he wants them to. A dazzling work of farce, satire, folklore and absurdity that gives full rein to its author's dancing intellect and Celtic wit, At Swim-Two-Birds is both a brilliant comic send-up of Irish literature and culture, and a portrayal of Dublin to compare with Joyce's Ulysses.

'This is just the book to give your sister if she's a loud, dirty, boozy girl'
Dylan Thomas

At Swim-Two-Birds is a marvel of imagination, language, and humor.
At Swim-Two-Birds has remained in my mind ever since it firstappeared as one of the best books of our century. A book in a thousand. . . in the line of Ulysses and Tristram Shandy.--Graham Greene
If I were a cultural dictator in England I would make At Swim-Two-Birds compulsory reading in all universities.--Philip Toynbee
Flann O'Brien is unquestionably a major author. His work, like that ofJoyce, is so layered as to be almost Dante-esque. . . . Joyce and FlannO'Brien assault your brain with words, style, magic, madness, andunlimited invention.--Anthony Burgess
'Tis the odd joke of modern Irish literature of the three novelistsin its holy trinity, James Joyce, Samuel Beckett and Flann O'Brien, theeasiest and most accessible of the lot is O'Brien. . . . Flann O'Brienwas too much his own man, Ireland's man, to speak in any but his owntongue.
At Swim-Two-Birdsis both a comedy and a fantasy of such staggering originality that itbaffles description and very nearly beggars our sense of delight.

Flann O'Brien was born on October 5, 1911, in Strabane, Ireland. He was a novelist and dramatist. He wrote a column for The Irish Times for 26 years under the name Myles na gCopaleen. His best known novel is At Swim-Two-Birds, which was written in 1939. It combines folklore, poetry and humor. He died in Dublin on April 1, 1966.

GOR001422028
At Swim-two-birds by Flann O'Brien
Flann O'Brien
Penguin Modern Classics
Used - Very Good
Paperback
Penguin Books Ltd
2000-02-24
240
0141182687
9780141182681
N/A
Book picture is for illustrative purposes only, actual binding, cover or edition may vary.
This is a used book - there is no escaping the fact it has been read by someone else and it will show signs of wear and previous use. Overall we expect it to be in very good condition, but if you are not entirely satisfied please get in touch with us.