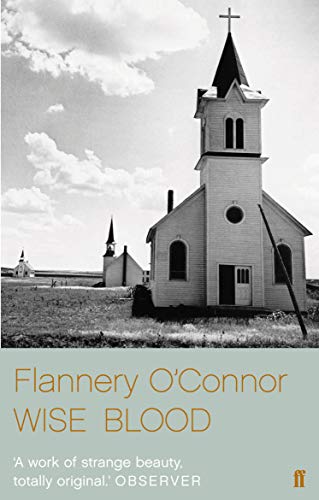 Wise Blood, Flannery O'Connor's first novel, is the story of Hazel Motes who, released from the armed services, returns to the evangelical Deep South. There he begins a private battle against the religiosity of the community and in particular against Asa Hawkes, the 'blind' preacher, and his degenerate fifteen-year-old daughter. In desperation Hazel founds his own religion, 'The Church without Christ', and this extraordinary narrative moves towards its savage and macabre resolution. 'A literary talent that has about it the uniqueness of greatness.' Sunday Telegraph 'No other major American writer of our century has constructed a fictional world so energetically and forthrightly charged by religious investigation.' The New Yorker 'A genius.' New York Times

"I was more impressed by "Wise Blood than any novel I have read for a long time. Her picture of the world is literally terrifying. Kafka is almost the only one of our contemporaries who has achieved such effects. I have tremendous admiration for the work of this young writer."--Caroline Gordon
"No other major American writer of our century has constructed a fictional world so energetically and forthrightly charged by religious investigation."--Brad Leithauser, "The New Yorker

Flannery O'Connor (1925-1964) was born in Savannah, Georgia, the only child of Catholic parents. In 1945 she enrolled at the Georgia State College for Women. After earning her degree she continued her studies on the University of Iowa's writing program, and her first published story, 'The Geranium', was written while she was still a student. Her writing is best known for its explorations of religious themes and southern racial issues, and for combining the comic with the tragic. After university, she moved to New York where she continued to write. In 1952 she learned that she was dying of lupus, a disease which had afflicted her father. For the rest of her life, she and her mother lived on the family dairy farm, Andalusia, outside Millidgeville, Georgia. For pleasure she raised peacocks, pheasants, swans, geese, chickens and Muscovy ducks. She was a good amateur painter. Her Complete Stories was awarded the Best of the National Book Awards by America's National Book Foundation in 2009.

GOR001204144
Wise Blood by Flannery O'Connor
Flannery O'Connor
Used - Very Good
Paperback
Faber & Faber
2008-02-28
176
0571241301
9780571241309
N/A
Book picture is for illustrative purposes only, actual binding, cover or edition may vary.
This is a used book - there is no escaping the fact it has been read by someone else and it will show signs of wear and previous use. Overall we expect it to be in very good condition, but if you are not entirely satisfied please get in touch with us.