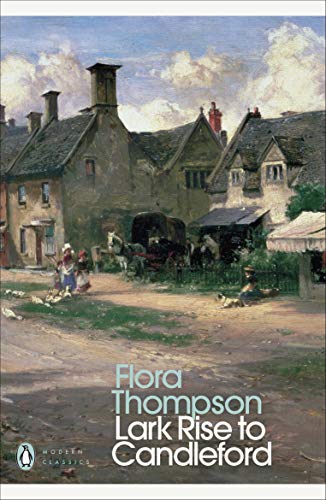 Used Price
£4.99
New RRP £9.99
Free Shipping in the UK
A portrayal of country life at the close of the 19th century. It tells the story of three closely related Oxfordshire communities - a hamlet, the nearby village and a small market town - is based on the author's experiences during childhood and youth.
Reviews:
Trustpilot
Very Good Good Well Read

Flora Thompson's immortal trilogy, containing "Lark Rise", "Over To Candleford" and "Candleford Green", is a heartwarming portrayal of country life at the close of the 19th century. This story of three closely related Oxfordshire communities - a hamlet, the nearby village and a small market town - is based on the author's experiences during childhood and youth. It chronicles May Day celebrations and forgotten children's games, the daily lives of farmworkers and craftsmen, friends and relations - all painted with a gaiety and freshness of observation that make this trilogy an evocative and sensitive memorial to Victorian rural England.

With a new introduction by Richard Mabey

Born in Juniper Hill, Oxfordshire, Flora Thompson left school at 14 to work in the local post office. She married young, and wrote mass-market fiction to help support her increasing family. In her 60s she published the semi-autobiographical trilogy combined as LARK RISE TO CANDLEFORD (1945). RICHARD MABEY is the author of some thirty books, including Whistling in the Dark: In Pursuit of the Nightingale, Beechcombings: the narratives of Trees, the ground-breaking and best-selling "cultural flora" Flora Britannica, and Gilbert White, which won the Whitbread Biography Award. His recent memoir Nature Cure was short-listed for three major literary awards. He writes for the Independent, the Guardian, Resurgence and Granta, and contributes frequently to BBC radio. He lives in Norfolk, in the Waveney Valley.

GOR001220303
Lark Rise to Candleford by Flora Thompson
Flora Thompson
Penguin Modern Classics
Used - Very Good
Paperback
Penguin Books Ltd
2000-05-25
544
0141183314
9780141183312
N/A
Book picture is for illustrative purposes only, actual binding, cover or edition may vary.
This is a used book - there is no escaping the fact it has been read by someone else and it will show signs of wear and previous use. Overall we expect it to be in very good condition, but if you are not entirely satisfied please get in touch with us.