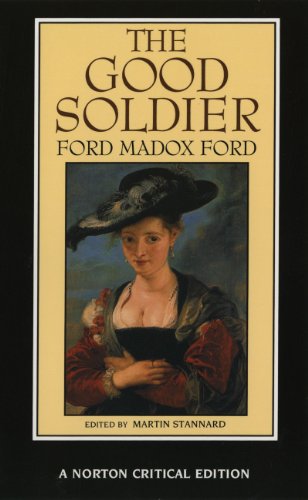 In Stock
£13.99
This Norton Critical Edition includes: 15 contemporary reviews; a chapter on literary impressionism with critiques by Henry James, Joseph Conrad, Ford himself and others; critical essays that provide a variety of perspectives on the book; and Ford's letter to Stella Ford, published in 1927.
Very Good Good
Only 2 left

Everything necessary for careful study of the novel is here: comprehensive annotation, material on manuscript development and textual variants, a detailed "Note on the Text", and relevant illustrations. Together, these materials present readers with both a freshly edited text and the opportunity to reconstruct alternative readings.

"Contemporary Reviews" includes fifteen important assessments of the work, all of which appeared within four months of the novel's publication.

"Literary Impressionism" collects eight critiques on the technique, including three by Ford and related writings by Henry James and Joseph Conrad, among others.

A Selected Bibliography is also included.

Ford Madox Ford wrote over 70 books, including several volumes of poetry and novels such as The Good Soldier. Martin Stannard is a professor of modern English literature at the University of Leicester, where he has taught since 1979. He was previously Leverhulme Research Fellow in English Literature at the University of Edinburgh. He is the author of Muriel Spark: The Biography, Evelyn Waugh, The Early Years: 1903-1939 and Evelyn Waugh, The Later Years: 1939-1966, and editor of Evelyn Waugh, The Critical Heritage. His many articles and reviews have appeared in Modern Language Review, Essays in Criticism, the New York Times Book Review, the Times Higher Education Supplement, and Novel, among other publications.

GOR001212863
The Good Soldier by Ford Madox Ford
Ford Madox Ford
Norton Critical Editions
Used - Very Good
Hardback
WW Norton & Co
1995-06-26
420
0393966348
9780393966343
N/A
Book picture is for illustrative purposes only, actual binding, cover or edition may vary.
This is a used book - there is no escaping the fact it has been read by someone else and it will show signs of wear and previous use. Overall we expect it to be in very good condition, but if you are not entirely satisfied please get in touch with us.