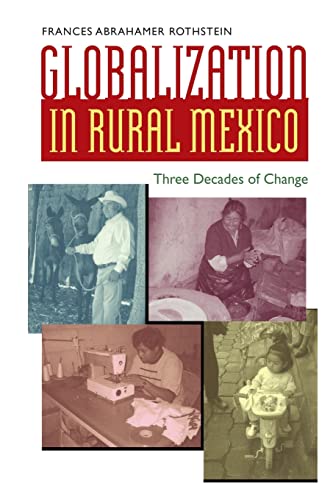 Out of Stock
£1.99
Chronicles the changes in production, consumption and social relations during three periods: the Mexican 'miracle', when economic development fuelled mobility for a large segment of the population; the lost decade of the 1980s, when much of what had been gained was lost; and, the period of trade liberalization and globalization.
Very Good
Only 0 left

Winner, Society of the Anthropology of Work Book Prize, 2010

When the ever-intensifying global marketplace "modernizes" rural communities, who stands to gain? Can local residents most impacted by changes to their social fabric ever recover or even identify what has been lost?

Rothstein's lucid work chronicles the changes in production, consumption, and social relations during three distinct periods: the Mexican "miracle," when economic development fueled mobility for a large segment of the population, including San Cosme's worker-peasants; the lost decade of the 1980s, when much of what had been gained was lost; and the recent period of trade liberalization and globalization, considered by many in Mexico and beyond as a panacea and a disaster at the same time.

After Mexico's textile industry decline in the late 1980s, some families of former textile workers in San Cosme opened home workshops-talleres-and a small-scale, textile-based economy took root. These families, who managed to prosper through their own trade and industry, demonstrate that those who rely on consumer demand for their livelihood need not always follow the dictate of the marketplace, but rather can position themselves assertively to influence alternative economic possibilities held close to their culture.

Employing rich ethnography and broad analysis, Rothstein focuses on how everyday life has been transformed by these processes, but shows also how important continuities with the past persist. She strikes a delicate balance between firmly grounded scientific study and a deep compassion for the subjects of her work, while challenging contemporary views of globalization and consumption.

FRANCES ABRAHAMER ROTHSTEIN is Professor of Anthropology at Towson University in Towson, Maryland.

GOR010200986
Globalization in Rural Mexico: Three Decades of Change by Frances Abrahamer Rothstein
Frances Abrahamer Rothstein
Used - Very Good
Paperback
University of Texas Press
2007-06-01
205
029271632X
9780292716322
Winner of Society of the Anthropology of Work Book Prize 2010 (United States)
Book picture is for illustrative purposes only, actual binding, cover or edition may vary.
This is a used book - there is no escaping the fact it has been read by someone else and it will show signs of wear and previous use. Overall we expect it to be in very good condition, but if you are not entirely satisfied please get in touch with us.