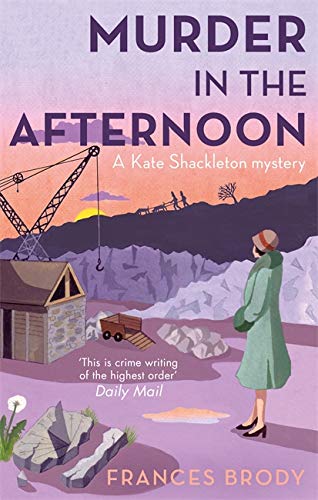 Murder In The Afternoon
by Frances Brody

Murder In The Afternoon Summary

Murder In The Afternoon: Number 3 in series by Frances Brody

DEAD ONE MINUTE Young Harriet and her brother Austin have always been scared of the quarry where their stone mason father works. So when they find him dead on the cold ground, they scarper quick smart and look for some help. ALIVE THE NEXT? When help arrives, however, the quarry is deserted and there is no sign of the body. Were the children mistaken? Is their father not dead? Did he simply get up and run away? A SINISTER DISAPPEARING ACT It seems like another unusual case requiring the expertise of Kate Shackleton. But for Kate this is one case where surprising family ties makes it her most dangerous - and delicate - yet ...

Customer Reviews - Murder In The Afternoon

Murder In The Afternoon Reviews

Frances Brody succeeds brilliantly. . . Her post-war world in which making any sort of living is hard grind and where an independent career woman is viewed with hostility is entirely convincing. Kate is a heroine to like and admire. . . Her further adventures are eagerly awaited * The Daily Mail *
Brody's excellent mystery splendidly captures the conflicts and attitudes of the time with well-developed characters * RT Book Reviews *
Reminiscent of the Golden Age mysteries, Murder in the Afternoon delivers an excellent whodunit, an atmospheric period piece, a snapshot of a bygone England and, in Kate, an appealing heroine wtih a complex past * Richmond Times Dispatch *

Frances Brody is the author of ten mysteries featuring Kate Shackleton as well as many stories and plays for BBC Radio, scripts for television and three sagas, one of which won the HarperCollins Elizabeth Elgin Award. A Woman Unknown was short-listed for the Mary Higgins Clark Award. Her stage plays have been toured by several theatre companies and produced at Manchester Library Theatre, the Gate and Nottingham Playhouse. Jehad was nominated for a Time Out Award. Frances lived in New York for a time before studying at Ruskin College, Oxford, and reading English Literature and History at York University. She has taught in colleges, and on writing courses for the Arvon Foundation.

GOR008031388
Murder In The Afternoon: Number 3 in series by Frances Brody
Frances Brody
Kate Shackleton Mysteries
Used - Like New
Paperback
Little, Brown Book Group
2012-03-01
400
0749954876
9780749954871
N/A
Book picture is for illustrative purposes only, actual binding, cover or edition may vary.
The book has been read, but looks new. The book cover has no visible wear, and the dust jacket is included if applicable. No missing or damaged pages, no tears, possible very minimal creasing, no underlining or highlighting of text, and no writing in the margins.