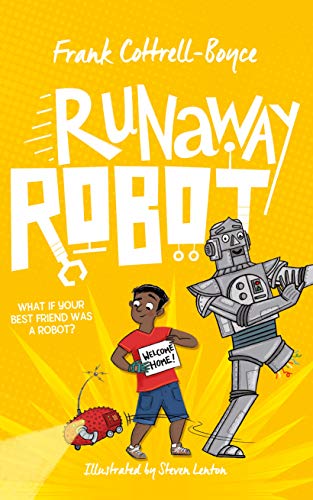 New Price
£12.99
Free Shipping in the UK
What if your best friend was a robot? A funny and heartwarming new adventure from award-winning author, Frank Cottrell-Boyce, with illustrations by Steven Lenton.
Reviews:
Trustpilot
New£12.99

Runaway Robot is a funny and heartwarming adventure about two best friends helping put themselves back together, from the award-winning Frank Cottrell-Boyce, illustrated by Steven Lenton.

When Alfie goes to Airport Lost Property, he finds more than he bargained for. A lot more. Because there's a giant robot called Eric hidden away on the shelves. Eric has lost one leg and half his memory. He's super strong, but super clumsy. He's convinced that he's the latest technology, when he's actually nearly one hundred year's old and ready for the scrap heap.

Can Alfie find a way to save Eric from destruction - before Eric destroys everything around him?

a comic and compelling tale set in a near-future filled with automated buses and dust-hog street cleaners, uproariously illustrated by Steven Lenton * Guardian *
What a funny, charming, life-affirming book * Richard Osman *
The world he imagines is cleverly conceived and the spirit of fun and adventure is pure Cottrell Boyce, but there are also messages about acceptance and diversity, tucked away between the madcap antics, which will resonate with readers of every age. Expect plenty of laughs, some unexpected twists and turns, and a big smile as the last page turns. * Lancashire Evening Post *
A funny and heartwarming adventure * Ni4Kids *
A brilliantly observed and sensitively written story about two unlikely best friends who help rebuild each other. There were plenty of moments which really made me chuckle but also some shocking reveals and scenes which made my bottom lip tremble a little. I would definitely recommend it for readers aged 8+ * Library girl *
Storytelling at its snortingly-funny, hugely enjoyable and heartily-emotional best... a little bit warm and wise, a little bit tender and touching; there is a LOT to love about this book * The Reader Teacher *
Frank's imagining of this futuristic world where pizza ovens deliver your pizza and driverless buses is really brilliant. Strangely it feels like you could touch it, it's so close and yet in my mind it still feels like a lifetime away. For me that made the story feel more real and added to the warmth I felt about this compelling tale. The characterisation is genuinely brilliant and wonderfully diverse * BookLover Jo *
I was really looking forward to reading this book and I can honestly say I was not disappointed. This is a tale of humour, humanity and two friends trying to get to the truth * Books For Topics *
Cottrell-Boyce writes with confidence and flair, spilling his story into the reader's head with artistry and comedy, so that readers are equally amused and enthralled, but also touched with a large brush of heart. He has a keen eye for human quirks, and seeing them play out both robotically as well as in humans, is rather fun. And Steven Lenton's illustrations create that extra dimension of humour. * Minerva Reads *
this is a story that will stick in the reader's mind long after the last page is read * Parents In Touch *
hilarious, complex and hugely satisfying * Booktrust *
Confidently written with heart and humour, the unputdownable Runaway Robot will have children roaring with laughter and wanting a best friend robot of their own! * Armadillo *
Frank Cottrell-Boyce's Runaway Robot (Macmillan, GBP12.99, 9+) is a masterpiece that deserves to sell millions. Lonely Alfie has a bionic arm, and when he truants from school and comes across Eric, a one-legged humanoid robot, it sets off a series of hair-raising events with a precision that has you laughing one moment and crying the next. -- Amanda Craig * New Statesman *
As ever from Cottrell Boyce, well-developed characters and an engaging storyline. * NB Magazine *
Two more maestros of children's fiction with moral compasses just as finely tuned remained surefire reads. Frank Cottrell-Boyce's latest was Runaway Robot (Macmillan), a madcap escapade starring a boy and a delusional bot. * Observer, best books of the year review *

Frank Cottrell-Boyce is an award-winning author and screenwriter. Millions, his debut children's novel, won the CILIP Carnegie Medal. He is also the author of Chitty Chitty Bang Bang Flies Again, Cosmic, Framed and The Astounding Broccoli Boy. His books have been shortlisted for a multitude of prizes, including the Guardian Children's Fiction Prize, the Whitbread Children's Fiction Award (now the Costa Book Award) and the Roald Dahl Funny Prize. Sputnik's Guide to Life on Earth was shortlisted for the 2017 CILIP Carnegie Medal and selected for the inaugural WHSmith Tom Fletcher Book Club.

Frank is a judge for the BBC Radio 2 500 Words competition and, along with Danny Boyle, devised the Opening Ceremony for the London 2012 Olympics. He has written for the hit TV series Dr Who and was the screenwriter for the hit film Goodbye Christopher Robin.

Steven Lenton hails from Cheshire where he spent many a school holiday working in the family Pom-pom Factory. Along with illustrating books, including Runaway Robot, Steven also designs greeting cards and prints. Steven lives with his partner and his dog in Crouch End where he dunks endless amounts of biscuits in big red spotty cups of tea whilst listening to Radio 2.