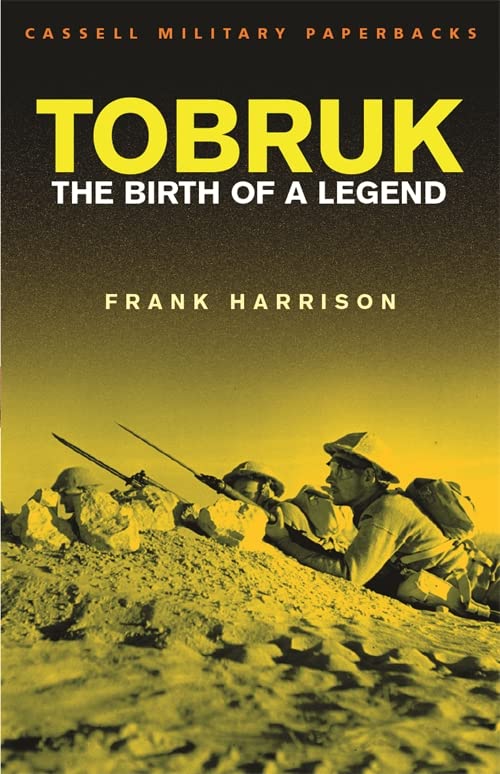 Tobruk: Birth of a legend by Frank Harrison

The siege of Tobruk in 1941 was the first time the British army succeeded in defeating a German army operation in World War II. Despite all the ingenuity of Erwin Rommel, the 'Desert Fox', and the bravery of his Afrika Korps, the outnumbered and outgunned British garrison held the port until a relief mission, 'Operation Battleaxe', drove back the German and Italian forces.

It was during this epic siege that 'Lord Haw Haw', the German propaganda broadcaster, coined the phrase 'Desert Rats'. He intended it as an insult, but the soldiers at Tobruk took a perverse pride in the name which became the nickname of the 8th Army in general and the 7th Armoured division in particular.

At the age of twenty Frank Harrison served on the signals staff during the siege of Tobruk. He was subsequently captured and spent several years as a prisoner of war in Africa, Italy, Germany and finally Czechoslovakia. Frank became an art teacher after the war and it was while teaching on an Indian reservation in Northern Canada that his writing career began.

GOR002813107
Tobruk: Birth of a legend by Frank Harrison
Frank Harrison
Cassell Military Paperbacks
Used - Very Good
Paperback
Orion Publishing Co
2003-01-09
352
0304362581
9780304362585
N/A
Book picture is for illustrative purposes only, actual binding, cover or edition may vary.
This is a used book - there is no escaping the fact it has been read by someone else and it will show signs of wear and previous use. Overall we expect it to be in very good condition, but if you are not entirely satisfied please get in touch with us.