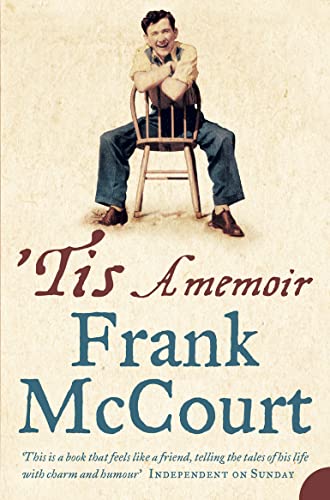 Frank McCourt continues his life story in the brilliant, bestselling sequel to the million-selling `Angela's Ashes'.

Frank McCourt continues his life story in the brilliant, bestselling sequel to the million-selling `Angela's Ashes'.

`Angela's Ashes' was a publishing phenomenon. Frank McCourt's critically-acclaimed, lyrical memoir of his Limerick childhood won the Pulitzer Prize, the National Book Critics' Circle Award, the Royal Society of Literature Award and the Los Angeles Times Book Award amongst others, and rapidly became a word-of-mouth bestseller topping all charts worldwide for over two years. It left readers and critics alike eager to hear more about Frank McCourt's incredible, poignant life.

`'Tis' is the story of Frank's American journey from impoverished immigrant with rotten teeth, infected eyes and no formal education to brilliant raconteur and schoolteacher. Saved first by a straying priest, then by the Democratic party, then by the United States Army, then by New York University - which admitted him on a trial basis though he had no high school diploma - Frank had the same vulnerable but invincible spirit at nineteen that he had at eight and still has today. And ``Tis' is a tale of survival as vivid, harrowing, and hilarious as Angela's Ashes. Yet again, it is through the power of storytelling that Frank finds a life for himself. `It is only the best storyteller who can so beguile his readers that he leaves them wanting more when he's done. McCourt proves himself one of the very best' (Newsweek). `With `Tis', McCourt blesses his readers with another chapter of his story, but as it closes, they will want still more.

'''Tis' feels like a friend, telling the tales of his life over a pint, with charm and humour, economy and pace. There is a sense of loss when you have to close the pages and sleep, or go on to other things. McCourt is a masterful writer. All who read `Angela's Ashes' will read ''Tis'. They will love it, and so did I.' Independent on Sunday

'Few will be able to resist this pacey and fluid sequel. In post-war New York, McCourt moves through work as a longshoreman, a spell in the army, to night-school, to become a creative writing teacher encouraging his kids to "write about what you know" - the same policy that has led him to belated international celebrity. McCourt's gift lies not simply in having lived through interesting times, but having developed his skills as an editor and narrator to produce two fine, funny and moving slices of a past that is not simply Ireland's, but everyone's.' Guardian

'Every page contains an unforced laugh. The gloom is indivisible from moments of great joy and compassion - the sound of jazz pouring from a club, the comforting arm of a fellow worker - which McCourt is able to express in his fresh and supple prose. Finally, and perhaps most importantly, McCourt has the power to transform even the saddest recollections into sentences of great beauty, and in that beauty lies the possibility of salvation.' Mail on Sunday

Frank McCourt is the author of the Pulitzer Prize winning and best-selling Angela's Ashes. It has sold two million copies in the UK and tens of millions worldwide. He followed this with the best-selling Tis and the final in the trilogy, Teacher Man, will be published in 2005. For thirty years he taught in NYC schools, before, in his 60s, settling down to write his story.

GOR010473220
'Tis by Frank McCourt
Frank McCourt
Used - Like New
Paperback
HarperCollins Publishers
2005-10-03
512
0007205244
9780007205240
N/A
Book picture is for illustrative purposes only, actual binding, cover or edition may vary.
The book has been read, but looks new. The book cover has no visible wear, and the dust jacket is included if applicable. No missing or damaged pages, no tears, possible very minimal creasing, no underlining or highlighting of text, and no writing in the margins.