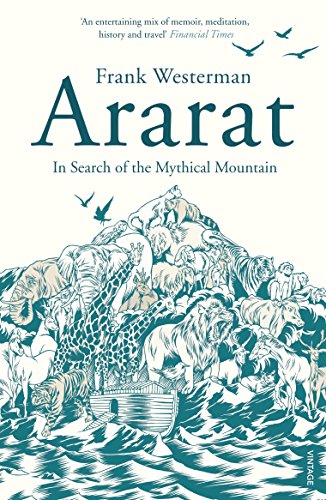 In Stock
£3.99
Mount Ararat in Turkey is where, as biblical tradition has it, Noah's Ark ran aground and God made his covenant with mankind.
Very Good
Only 4 left

Ararat: In Search of the Mythical Mountain by Frank Westerman

Mount Ararat in Turkey is where, as biblical tradition has it, Noah's Ark ran aground and God made his covenant with mankind. Now it stands astride the fault-line between religion and science, a geographical, political and cultural crossroads, bound up with the centuries-old history of warfare between different cultures in this region. Frank Westerman takes a pilgrimage from the mountain's foot to its highest slopes, meeting along the way geologists, priests and an expedition in search of the Ark's remains, as well as a Russian astronaut who observes that 'there is something between heaven and earth about which we humans know nothing'. Ararat is a dazzling, highly personal book about science, religion and all that lies between, by one of Europe's most celebrated young writers.

"Thought-provoking and beautifully written... the book is much more than a travelogue... Sam Garrett's excellent translation highlights both Westerman's skilful pacing and love of language... Westerman has achieved his aim - to climb the mountain - and has found, too, an answer of sorts to the question of how science and religion can coexist" * Literary Review *
"A entertaining mix of memoir, meditation, history and travel" * Financial Times *
"What separates Ararat from the hundreds of other books that have taken on this subject in the past few years is the poetic, novelistic logic behind the author's search... It is Westerman's calm intelligence and freshness of perspective that make his book so appealing" * Sunday Times *
"In this beguiling, digressive mix of travelogue, memoir, history and gentle philosophising, [Westerman] probes at the roots of his own sceptical fascination with the mountain...consistently fascinating and elegantly written" * Scotsman *
"A book of stupendous richness and complexity... written with enough knowledge, craft and competence to keep the drowsiest of readers wide awake from first to last" * Spectator *

Frank Westerman was born in 1964 and lived and worked in Moscow from 1997 to 2002 as correspondent for the leading Dutch NRC Handelsblad newspaper. Westerman is the author of five highly praised books. His work has been published in more than ten languages and has won many prizes.

GOR004410763
Ararat: In Search of the Mythical Mountain by Frank Westerman
Frank Westerman
Used - Very Good
Paperback
Vintage Publishing
2010-05-06
240
0099512785
9780099512783
N/A
Book picture is for illustrative purposes only, actual binding, cover or edition may vary.
This is a used book - there is no escaping the fact it has been read by someone else and it will show signs of wear and previous use. Overall we expect it to be in very good condition, but if you are not entirely satisfied please get in touch with us.