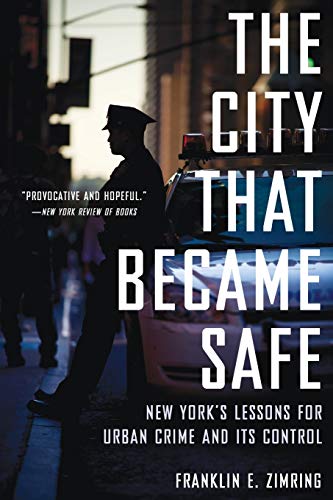 The City that Became Safe
by Franklin E. Zimring

The City that Became Safe Summary

The City that Became Safe: New York's Lessons for Urban Crime and Its Control by Franklin E. Zimring

The forty-percent drop in crime that occurred across the U.S. from 1991 to 2000 remains largely an unsolved mystery. Even more puzzling is the eighty-percent drop over nineteen years in New York City. Twice as long and twice as large, it is the largest crime decline on record. In The City That Became Safe, Franklin E. Zimring seeks out the New York difference through a comprehensive investigation into the city's falling crime rates. The usual understanding is that aggressive police created a zero-tolerance law enforcement regime that drove crime rates down. Is this political sound bite true-are the official statistics generated by the police accurate? Though zero-tolerance policing and quality-of-life were never a consistent part of the NYPD's strategy, Zimring shows the numbers are correct and argues that some combination of more cops, new tactics, and new management can take some credit for the decline That the police can make a difference at all in preventing crime overturns decades of conventional wisdom from criminologists, but Zimring also points out what most experts have missed: the New York experience challenges the basic assumptions driving American crime- and drug-control policies. New York has shown that crime rates can be greatly reduced without increasing prison populations. New York teaches that targeted harm reduction strategies can drastically cut down on drug related violence even if illegal drug use remains high. And New York has proven that epidemic levels of violent crime are not hard-wired into the populations or cultures of urban America. This careful and penetrating analysis of how the nation's largest city became safe rewrites the playbook on crime and its control for all big cities.

The City that Became Safe Reviews

"Accessible to both undergraduates and postgraduates, this is an excellent statistical study. The reader should not expect the master code that unlocks all of the secrets of New York's crime decline; however, The City that Became Safe should be considered a standard work on this fascinating phenomenon." --New York Journal of Books

"One of the best studies of the psychology of crime, and of cities, that I have ever read."
--Adam Gopnik, newyorker.com

"The City That Became Safe" is thoughtful, provocative, and quite brilliant. Zimring demonstrates that big cities can cut crime and reduce incarceration at the same time. New Yorkers, and all city dwellers, will feel safer after reading this powerful book." --Herbert Sturz, Open Society Foundations

"Franklin Zimring's examination of the astonishing New York City crime decline is fascinating and totally convincing. Reading this brilliant book is mandatory for criminologists and students of policing, and it's a damn good idea for everyone else." --Albert Alschuler, Northwestern University Law School

"Franklin Zimring boldly takes on one of the most important yet ill-understood social facts of the late twentieth century: why crime dropped like a stone for almost twenty years in New York. He hones in on the significant portion of crime that is 'situational and contingent' rather than rooted in urban structure, and identifies police policies and practices that go a long way toward explaining crime rates fell so precipitously. At the beginning of the 1990s New York was in trouble; now it is back, in large degree because of the story told here." --Wesley Skogan, Northwestern University

"A doubly profound book-in its withering demonstration that the New York City crime drop undoes much of the conventional social science wisdom about the embeddedness of American criminality, and in its optimistic lesson about the power of social policy to alter the supposedly endemic nature of urban crime." --Robert Weisberg, Stanford University

"The City That Became Safe sets the standard for reasoned analysis of one of the most important public-policy issues of our time." --Richard Rosenfeld, University of Missouri-St. Louis

"This is a wonderful, startling, and important book. It is a masterpiece of statistical rigor; but also of insight and common sense. All serious scholars of modern urban life, and, hopefully, all policy makers and criminologists, should read and absorb the lessons of this profound exploration of the riddles of crime and punishment in America." --Lawrence M. Friedman, Stanford University

"Using an array of statistics and a meticulous approach, Zimring, one of the nation's preeminent criminologists, convincingly argues that an identifiable human strategy does deserve most of the credit, but it was neither a single approach nor a single elected official. This is a model policy study on a crucial community concern demonstrating that, when it comes to public safety, government can make a difference. Highly recommended."
--CHOICE

"Zimring does a wonderful job letting the statistics tell the story of New York City's drop in crime... The result is a study that adds much to our knowledge of crime and crime policy while reminding us just how much we still have to learn. Recommended for all practicing criminologists and graduate students studying in the field." --International Social Science Review

"This book advances the discussion of urban crime policy by an order of magnitude for academics... [and] criminal justice instructors will need this book as an antidote for the plethora of 'it wasn't really the police' books available until now." --Journal of Urban Affairs

Franklin E. Zimring is the William G. Simon Professor of Law and chair of the Criminal Justice Research Program at the University of California, Berkeley. Since 2005, he has been the first Wolfen Distinguished Scholar at Boalt Hall School of Law. Professor Zimring's recent books include The Great American Crime Decline and The Next Frontier (with David T. Johnson) .

GOR010191767
The City that Became Safe: New York's Lessons for Urban Crime and Its Control by Franklin E. Zimring
Franklin E. Zimring
Studies in Crime and Public Policy
Used - Very Good
Paperback
Oxford University Press Inc
2013-11-28
272
0199324166
9780199324163
N/A
Book picture is for illustrative purposes only, actual binding, cover or edition may vary.
This is a used book - there is no escaping the fact it has been read by someone else and it will show signs of wear and previous use. Overall we expect it to be in very good condition, but if you are not entirely satisfied please get in touch with us.