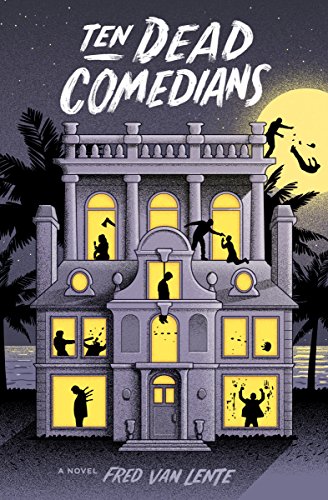 Now in paperback, Fred Van Lente's brilliant debut is both a savagely funny homage to the Golden Age of Mystery and a thoroughly contemporary show-business satire.

As the story opens, nine comedians of various acclaim are summoned to the island retreat of legendary Hollywood funnyman Dustin Walker. The group includes a former late-night TV host, a washed-up improv instructor, a ridiculously wealthy "blue collar" comic, and a past-her-prime Vegas icon. All nine arrive via boat to find that every building on the island is completely deserted. Marooned without cell phone service or wifi signals, they soon find themselves being murdered one by one. But who is doing the killing, and why?

A darkly clever take on Agatha Christie's And Then There Were None and other classics of the genre, Ten Dead Comedians is a marvel of literary ventriloquism, with hilarious comic monologues in the voice of every suspect. It's also an ingeniously plotted puzzler with a twist you'll never see coming!

"Original, funny, and - like all great comedians - Van Lente slays the audience"--David Quantick, Emmy award-winning writer of Veep, The Thick of It, Brass Eye, and Harry Hill's TV Burp

"Van Lente's strength is in his narrative ability [...] and his sharp, acerbic humor. The mystery is pretty fun too!"--BookRiot

"Van Lente's look at the selfishness and misery of show business is sure to be a hit with mystery lovers who savor unusual setups; the side of snark provided by the bitter islanders adds to the atmosphere."--Booklist

"This book is like if Agatha Christie was funny, which is to say that it is infinitely better than Agatha Christie. If you're in the comedy world you'll feel that you know some of the characters firsthand. Hell, if you're a 21st century human you'll feel you know some of the characters firsthand."--Jennifer Wright, author of It Ended Badly and Get Well Soon

"Ten Dead Comedians is a funny and nail-biting front row seat to the bloodthirsty world of professional comedy ... and that's BEFORE the murders start."--Daniel Kibblesmith, writer for The Late Show With Stephen Colbert

"An homage not only to stand-up comedians everywhere but to Agatha Christie's original mystery, Van Lente's novel is hilarious and suspenseful--all at once."--BookTrib

"Fred Van Lente takes an old idea and drags it kicking and screaming into the 21st Century. So assured, so fresh and so inventive, it's hard to believe this is his first novel."--Kevin Wignall, best-selling author of A Death in Sweden and The Hunter's Prayer

"Fred Van Lente delivers an Agatha Christie twisty mystery filled with all the cruel, horrible, and violent deaths that only stand-up comedians truly deserve."--Grady Hendrix, author of Horrorstoer, My Best Friend's Exorcism, and Paperbacks from Hell

"[This] debut fiction could possibly become, in its own way, as much of a classic as the novel it honors."--New York Journal of Books

"I flew through this book, anxious to uncover the identity of the killer, and that is perhaps the highest recommendation I can give. I couldn't put it down."--Geeks of Doom

"It's a bit guiltily we admit that watching a handful or two of hack comedians be slowly picked off is a delight."--Cool Material

"A fantastic debut and a fun ode to Agatha Christie's And Then There Were None that provides plenty of comedy to go along with the rampant murder."--Four Letter Nerd

"This book [is] oddly mesmerizing."--Mystery Playground

Fred Van Lente is the #1 New York Times best-selling writer of the comics Odd Is on Our Side, Archer & Armstrong, and Action Philosophers! He also cowrote the graphic novel Cowboys and Aliens, which was made into a film starring Harrison Ford and Daniel Craig.
GOR011033069
9781683690368
1683690362
Ten Dead Comedians: A Murder Mystery by Fred van Lente
Fred van Lente
Used - Very Good
Paperback
Quirk Books
2018-06-15
336
N/A
Book picture is for illustrative purposes only, actual binding, cover or edition may vary.
This is a used book - there is no escaping the fact it has been read by someone else and it will show signs of wear and previous use. Overall we expect it to be in very good condition, but if you are not entirely satisfied please get in touch with us
Trustpilot