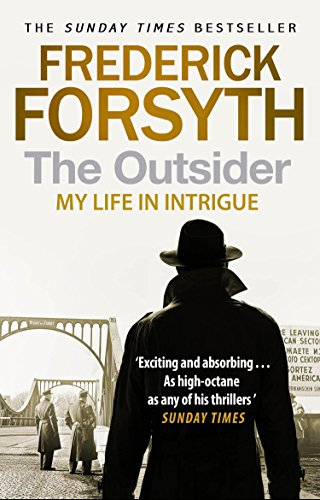 The Outsider by Frederick Forsyth

At eighteen, Forsyth was the youngest pilot to qualify with the RAF. At twenty-five, he was stationed in East Berlin as a journalist during the Cold War. He wrote his game-changing first novel, The Day of the Jackal and never looked back. He's been shot at, he's been arrested, he's even been seduced by an undercover agent. This is his story.

The Outsider: My Life in Intrigue by Frederick Forsyth

FREDERICK FORSYTH HAS SEEN IT ALL. AND LIVED TO TELL THE TALE...
At eighteen, Forsyth was the youngest pilot to qualify with the RAF.
At twenty-five, he was stationed in East Berlin as a journalist during the Cold War.
Before he turned thirty, he was in Africa controversially covering the bloodiest civil war in living memory.
Three years later, broke and out of work, he wrote his game-changing first novel, The Day of the Jackal. He never looked back.
Forsyth has seen some of the most exhilarating moments of the last century from the inside, travelling the world, once or twice on her majesty's secret service. He's been shot at, he's been arrested, he's even been seduced by an undercover agent.
But all the while he felt he was an outsider. This is his story.

Forsyth insists that The Outsider is not an autobiography. So I will just say that this is one of the most exciting and enjoyable accounts of an author's life, in vaguely chronological order and written by the author himself, that I have ever read. * The Sunday Times *
The comparison with Bond is apt . . . it may well be the best book he has ever written. * Daily Mail *
If there is one memoir to read this autumn, it's Frederick Forsyth's extraordinary life story, The Outsider, which reads like a James Bond novel. The author of The Day Of The Jackal tells his own story and it's clear where the inspiration for so many of his best-selling thrillers came from when you read about his own life, beginning as the RAF's youngest pilot at the age of 19 and carrying on through being captured by the Stasi and threatened by the IRA. * Irish Independent *
Enjoyed Freddie Forsyth last night. Boy has he lived a full life! And a life so beyond anything most of us can imagine, full of coups, civil wars, spies, and most importantly, typewriters. Great stories. -- Simon Mayo * Radio 2 Drivetime blog *
In this engaging level-headed memoir . . . he reminds me of Ian Fleming, a fellow Europhile (in the cultural rather than political sense_ who also honed his writing skills at Reuters. Fleming is more elegant, more playful; Forsyth has more balls. * Literary Review *
There's plenty of sex and subterfuge, with close shaves, hairy escapades and hints of involvement with the intelligence services . . . ultimately, The Outsider is as good a read as any of the thrillers. If you're looking for thrills and spills, you'll find them. * Country Life *

Former RAF pilot and investigative journalist, Frederick Forsyth defined the modern thriller when he wrote The Day of The Jackal, described by Lee Child as 'the book that broke the mould', with its lightning-paced storytelling, effortlessly cool reality and unique insider information. Since then he has written twelve novels which have been bestsellers around the world: The Odessa File, The Dogs of War, The Devil's Alternative, The Fourth Protocol, The Negotiator, The Deceiver, The Fist of God, Icon, Avenger, The Afghan, The Cobra and, most recently, The Kill List. He lives in Buckinghamshire, England.

GOR007552232
9780552171700
0552171700
The Outsider: My Life in Intrigue by Frederick Forsyth
Frederick Forsyth
Used - Very Good
Paperback
Transworld Publishers Ltd
2016-05-19
368
N/A
Book picture is for illustrative purposes only, actual binding, cover or edition may vary.
This is a used book - there is no escaping the fact it has been read by someone else and it will show signs of wear and previous use. Overall we expect it to be in very good condition, but if you are not entirely satisfied please get in touch with us
Trustpilot