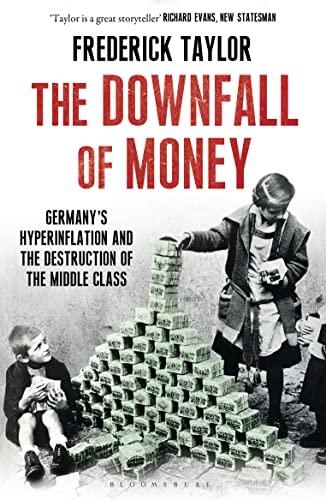 The Downfall of Money
by Frederick Taylor

The Downfall of Money Summary

The Downfall of Money: Germany's Hyperinflation and the Destruction of the Middle Class by Frederick Taylor

Many theorists believed a hundred years ago, just as they did at the beginning of our twenty-first century, that the world had reached a state of economic perfection, a never before seen condition of beneficial human interdependence that would lead to universal growth and prosperity. And yet the early years of the Weimar Republic in Germany witnessed the most complete and terrifying unravelling of a major country's financial system to have occurred in modern times. The story of the Weimar Republic's financial crisis has a clear resonance in the second decade of the twenty-first century, when the world is anxious once more about what money is, what it means and how we can judge if its value is true. The Downfall of Money will tell anew the dramatic story of the hyperinflation that saw the once-solid German mark, worth 4.2 to the dollar in 1914, trading at over four trillion by the autumn of 1923. It is a trajectory of events uncomfortably relevant for today's uncertain world. The Downfall of Money will reveal the real causes of the crisis, what this collapse meant to ordinary people, and also trace its connection to Germany's subsequent catastrophic political history. By drawing on a wide range of sources and making sense for the general reader of the vast amount of specialist research that has become available in recent decades, it will provide a timely, fresh and surprising look at this chilling period in history.

The Downfall of Money Reviews

He uses reportage well ... And has a deft touch with personal anecdotes. His forte, revealed in earlier books on Germany, is narrative history, which trots along at a friendly pace * The Times *
Taylor has many absorbing passages: his accounts of life in pre-war Berlin, the immediate post-war stance of the imperial navy, the outrages of the Freikorps, the persistence of nationalism, the ravages of the extended Allied blockage and the Franco-Belgian occupation of the Ruhr in 1923. Equally arresting ... Is a German memorandum written in 1914 (but only discovered in 1950) on the assumption that the country would win the war ... Embellished with much contemporary detail painstakingly trawled from newspapers, diaries and other books * Literary Review *
Germans are terrified of inflation ... By the end of The Downfall of Money it is clear why these fears are so deeply embedded. At the root of the trauma lie the events of 1923, when the German currency plummeted from 7,500 Reichsmarks to the dollar to a rate of 2.5 trillion ... It is remarkable that the world's second-biggest economy didn't disintegrate. Frederick Taylor, who has written several books on this era, is careful to blame no one ... He is quick to offer parallels with the recent financial crisis, when many governments turned to quantitative easing ... To avoid recession or even depression. And his book has suggestions about where the world may be heading if it is not careful * Economist *
If you thought you knew everything about the Nazis, Frederick Taylor's The Downfall of Money may make you pause ... Taylor doesn't make heavy weather with the comparisons between what faced Germany after 1918 and the current Eurozone crisis but there is no doubt that this story resonates because of these parallels * Big Issue Cymru *
Excellent ... By skillfully weaving together economic history with political narrative and drawing on sources from everyday life as well as the inner cabinet of diplomacy, Mr. Taylor tells the history of the Weimar inflation as the life-and-death struggle of the first German democracy ... This is a dramatic story, well told * Wall Street Journal *
The British historian Frederick Taylor has written so brilliantly and incisively about Adolf Hitler that it is no surprise that he has turned his attention to the German economic meltdown ... Mr. Taylor's book, Exorcising Hitler, proved the author's prowess at social and political historiography and a magnificent grasp of Germany as a whole. The Downfall of Money demonstrates that superb attunement to Germany anew and also [Taylor's] mastery as an economic historian ... Firmly and rightly grounded in its own time and place, The Downfall of Money nonetheless resonates in our own * Washington Times *

Frederick Taylor was educated at Aylesbury Grammar School, and read History and Modern Languages at Oxford, and did postgraduate work at Sussex University. He edited and translated The Goebbels Diaries and is the author of the acclaimed Dresden, The Berlin Wall and Exorcising Hitler. He lives in Cornwall.

GOR010792514
The Downfall of Money: Germany's Hyperinflation and the Destruction of the Middle Class by Frederick Taylor
Frederick Taylor
Used - Like New
Paperback
Bloomsbury Publishing PLC
2014-09-11
432
1408840189
9781408840184
N/A
Book picture is for illustrative purposes only, actual binding, cover or edition may vary.
The book has been read, but looks new. The book cover has no visible wear, and the dust jacket is included if applicable. No missing or damaged pages, no tears, possible very minimal creasing, no underlining or highlighting of text, and no writing in the margins.