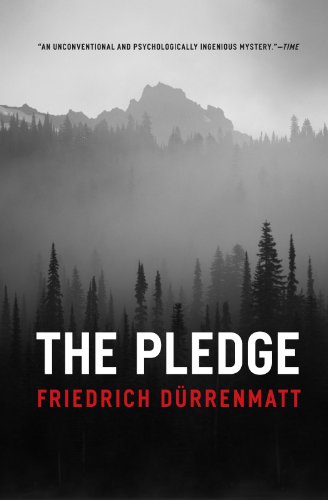 The Pledge
by Freidrich Durrenmatt

The Pledge by Freidrich Durrenmatt

Set in a small town in Switzerland, The Pledge centers around the murder of a young girl and the detective who promises the victim's mother he will find the perpetrator. After deciding the wrong man has been arrested for the crime, the detective lays a trap for the real killer--with all the patience of a master fisherman. But cruel turns of plot conspire to make him pay dearly for his pledge. Here Friedrich D rrenmatt conveys his brilliant ear for dialogue and a devastating sense of timing and suspense. Joel Agee's skilled translation effectively captures the various voices in the original, as well as its chilling conclusion.

One of D rrenmatt's most diabolically imagined and constructed novels, The Pledge was adapted for the screen in 2000 in a film directed by Sean Penn and starring Jack Nicholson.

"Friedrich D rrenmatt (1921-1990) was best known as the author of clever, morally inquisitive plays such as 'The Visit' and 'The Physicists.' In the early 1950s he also wrote three short, spellbinding mystery novels, which the University of Chicago Press has reissued in paperback with new translations from the German by Joel Agee: The Pledge and The Inspector Barlach Mysteries: The Judge and His Hangman &Suspicion. The latter includes a thoughtful foreword by Sven Birkerts, who praises D rrenmatt's talent as a captivating entertainer who could also 'play through complex moral issues with a speed-chess decisiveness and inexorability.' . . . These are slender tales. But they have the weight and texture of classics. Mystery readers should be grateful to the University of Chicago Press for bringing these gems back to life."-- (02/04/2007)

"The Swiss essayist Friedrich D rrenmatt (1921-90) was a prolific writer of detective novels with a low regard for detective fiction. 'You set up your stories logically, like a chess game: all the detective needs to know is the rules, he replays the moves of the game, and checkmate, the criminal is caught and justice has triumphed. This fantasy drives me crazy.' D rrenmatt's tale doesn't so much alter the rules as sweep all the figures to the floor. Three young girls, each with blond braids and red dresses, are found dismembered in the woods. A pattern seems to emerge, yet the attempt to catch the killer develops into a fruitless obsession which drives the head of the investigation insane. D rrenmatt incorporates fairy-tale archetypes to distort the typical conventions of a psychological thriller--when little girls in red dresses skip off into the woods, should the investigation team focus their enquiries on a big, bad wolf? Not a book for anyone who likes a tidy conclusion, but as D rrenmatt says: 'The only way to avoid getting crushed by absurdity, is to humbly include the absurd in our calculations.'"

Friedrich D rrenmatt (1921-1990) was a prolific Swiss dramatist, novelist, and essayist. His Selected Writings, in three volumes, is also published by the University of Chicago Press. Joel Agee has translated numerous German authors into English. Sven Birkerts is the author of six books, including The Gutenberg Elegies: The Fate of Reading in an Electronic Age and My Sky Blue Trades: Growing Up Counter in a Contrary Time. He is editor of the journal AGNI and teaches writing at Harvard University.

GOR003641284
The Pledge by Freidrich Durrenmatt
Freidrich Durrenmatt
Used - Very Good
Paperback
The University of Chicago Press
2006-10-10
176
0226174379
9780226174372
N/A
Book picture is for illustrative purposes only, actual binding, cover or edition may vary.
This is a used book - there is no escaping the fact it has been read by someone else and it will show signs of wear and previous use. Overall we expect it to be in very good condition, but if you are not entirely satisfied please get in touch with us.