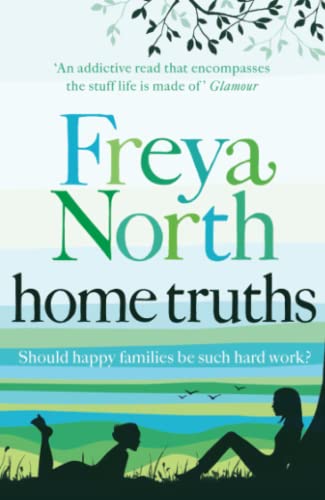 Should happy families be such hard work?

Should happy families be such hard work?

When their uncle Django's 75th birthday is interrupted by a mysterious visitor with a shocking revelation, sisters Fen, Pip and Cat find that the man who was like a father to them is now a stranger.

Their mother ran off with a cowboy from Denver when they were young leaving the three sisters to be raised by their devoted, eccentric uncle Django. No matter what problems they've encountered - relationships, work, starting families, bringing up babies and step-kids - they've always had each other to depend on.Until now.

`If you like chick-lit with a generous side-helping of sex, you'll devour this. Tangled mother/daughter relationships unravel and tantalising family riddles keep you glued to the end.' Cosmopolitan

`Freya North has matured to produce an emotive novel that deals with the darker side of love - these are real women with real feelings.' She

`Tantrums, tarts, tears and text-sex...what's not to love about this cautionary tale for true romantics?' Heat

`A distinctive storytelling style and credible, loveable characters...an addictive read that encompasses the stuff life is made of: love, sex, fidelity and, above all, friendship.' Glamour

Freya North gave up a Ph.D. to write her first novel, Sally. For four years she turned deaf ears to parents and friends who pleaded with her to "get a proper job". She went on the dole and did a succession of freelance and temping jobs. Five publishers entered a bidding war for the book, and her first novel, Sally, was published to great acclaim. Her subsequent books, Chloe, Polly, Cat, Fen, Pip , Love Rules, Home Truths and Pillow Talk have all proved bestsellers.

GOR000502691
Home Truths by Freya North
Freya North
Used - Very Good
Paperback
HarperCollins Publishers
2006-11-06
464
0007180357
9780007180356
N/A
Book picture is for illustrative purposes only, actual binding, cover or edition may vary.
This is a used book - there is no escaping the fact it has been read by someone else and it will show signs of wear and previous use. Overall we expect it to be in very good condition, but if you are not entirely satisfied please get in touch with us.