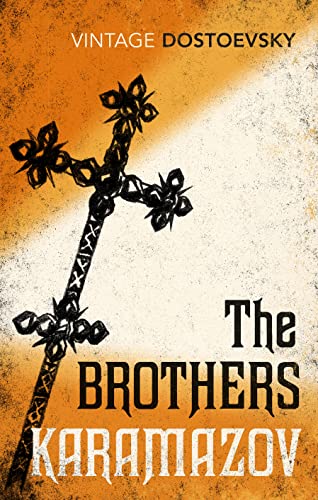 The Brothers Karamazov
by Fyodor Dostoevsky

The Brothers Karamazov by Fyodor Dostoevsky

"Dostoevsky makes Martin Amis seem as if he was writing 130 years ago and that Dostoevsky is writing now. Read all of Dostoevsky. These books are for now and they matter, because it's up to us to call a halt to our TV producers, politicians, gutless artists, poets and writers: these "teenagers of all ages" who are propelling us towards a consumerist hell of disposability over quality" -- Billy Childish
"Donne, Herbert, Shakespeare, Jane Austen, George Eliot, Dostoevsky, Henry James - these are the great psychologists - far greater than Freud or Klein or Jung" -- Sally Vickers
"No reader who knows The Brothers Karamazov should ignore this magnificent translation. And no reader who doesn't should wait any longer to acquaint himself with one of the peaks of modern fiction" * USA Today *
"It returns us to a work we thought we knew - made new again" * Washington Post *
"In this new translation one finally gets the musical whole of Dostoevsky's original" * New York Times Book Review *

Fyodor Dostoevsky was born in Moscow on 11th November 1821. He had six siblings and his mother died in 1837 and his father in 1839. He graduated from the St Petersburg Academy of Military Engineering in 1846 but decided to change careers and become a writer. His first book, Poor Folk, did very well but on 23rd April 1849 he was arrested for subversion and sentenced to death. After a mock-execution his sentence was commuted to hard labour in Siberia where he developed epilepsy.He was released in 1854.His 1860 book, The House of the Dead was based on these experiences. In 1857 he married Maria Dmitrievna Isaeva. After his release he adopted more conservative and traditional values and rejected his previous socialist position. In the following years he spent a lot of time abroad, struggled with an addiction to gambling and fell deeply in debt. His wife died in 1864 and he married Anna Grigoryeva Snitkina. In the following years he published his most enduring and successful books, including Crime and Punishment (1865). He died on 9th February 1881.

GOR001206388
The Brothers Karamazov by Fyodor Dostoevsky
Fyodor Dostoevsky
Used - Very Good
Paperback
Vintage Publishing
1992-01-16
816
0099922800
9780099922803
N/A
Book picture is for illustrative purposes only, actual binding, cover or edition may vary.
This is a used book - there is no escaping the fact it has been read by someone else and it will show signs of wear and previous use. Overall we expect it to be in very good condition, but if you are not entirely satisfied please get in touch with us.