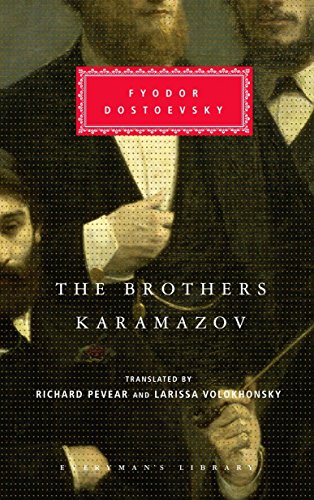 The Brothers Karamazov
by Fyodor Dostoyevsky

Used Price
£5.99
New RRP £8.99
Free Shipping in the UK
When brutal landowner Fyodor Karamazov is murdered, the lives of his sons are changed irrevocably: Mitya, the sensualist, whose bitter rivalry with his father immediately places him under suspicion for parricide; Ivan, the intellectual, whose mental tortures drive him to breakdown; the spiritual Alyosha, who tries to heal the family's rifts.
Very Good Good Well Read

The Brothers Karamazov by Fyodor Dostoyevsky

'The most magnificent novel ever written' Sigmund Freud

The murder of brutal landowner Fyodor Karamazov changes the lives of his sons irrevocably: Mitya, the sensualist, whose bitter rivalry with his father immediately places him under suspicion for parricide; Ivan, the intellectual, driven to breakdown; the spiritual Alyosha, who tries to heal the family's rifts; and the shadowy figure of their bastard half-brother, Smerdyakov. Dostoyevsky's dark masterwork evokes a world where the lines between innocence and corruption, good and evil, blur, and everyone's faith in humanity is tested.

Translated with an Introduction and notes by DAVID McDUFF

Fyodor Dostoyevsky (Author)
Fyodor Mikhailovich Dostoevsky was born in Moscow in 1821. His debut, the epistolary novella Poor Folk(1846), made his name. In 1849 he was arrested for involvement with the politically subversive 'Petrashevsky circle' and until 1854 he lived in a convict prison in Omsk, Siberia. From this experience came The House of the Dead (1860-2). In 1860 he began the journal Vremya (Time). Already married, he fell in love with one of his contributors, Appollinaria Suslova, eighteen years his junior, and developed a ruinous passion for roulette. After the death of his first wife, Maria, in 1864, Dostoyevsky completed Notes from Underground and began work towards Crime and Punishment (1866). The major novels of his late period are The Idiot (1868), Demons(1871-2) and The Brothers Karamazov (1879-80). He died in 1881.

GOR002010935
The Brothers Karamazov by Fyodor Dostoyevsky
Fyodor Dostoyevsky
Used - Very Good
Paperback
Penguin Books Ltd
2003-02-27
1056
0140449248
9780140449242
N/A
Book picture is for illustrative purposes only, actual binding, cover or edition may vary.
This is a used book - there is no escaping the fact it has been read by someone else and it will show signs of wear and previous use. Overall we expect it to be in very good condition, but if you are not entirely satisfied please get in touch with us.