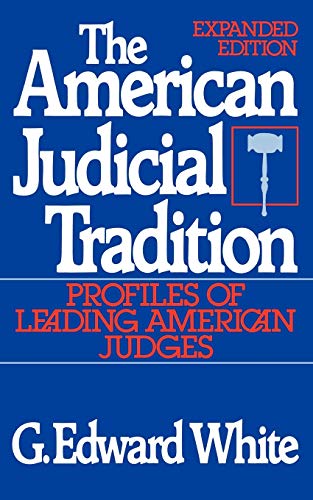 The American Judicial Tradition
by G. Edward White (John B. Minor Professor of Law and History, the University of Virginia)

In Stock
£3.99
Now available in an expanded and updated second edition, this highly-acclaimed volume presents a series of portraits of the most famous appellate judges in American history from John Marshall to Warren Burger. White traces the American judicial tradition through sketches of the careers and contributions of these renowned judges.
Very Good
Only 1 left

The American Judicial Tradition: Profiles of Leading American Judges by G. Edward White (John B. Minor Professor of Law and History, the University of Virginia)

Now available in a newly revised and updated edition, this highly acclaimed volume presents a series of portraits of the most famous appellate judges in American history from John Marshall to the Burger court.

"A rich source of information and ideas....Worthwhile not only because, as history, it provides an excellent introduction to some of the most influential American judges and cases, but also because as theory it, like all good books, provokes as many questions as it resolves."--Administrative Law Review
Praise for the first edition
"Among the important books, The American Judicial Tradition deserves a prominent place....In an era of growing concern about the 'imperial judiciary, ' it merits the serious reader's attention."--Jethro Lieberman, The New York Times Book Review
"A scholarly, well-informed, illuminating work that penetrates the mystique of the judicial mantle....White has superbly conveyed the morality of one of our most sacred institutions."--Trial Magazine
"White's tracing of the varieties of American judicial experience is a dazzling performance, one of the more illuminating essays in American political history that I have read."--Louis S. Auchincloss
"The single most helpful study of the American judiciary, and a brilliant essay on one of the most crucial institutions of our first 200 years."--Stanley Katz
"The book flows well. The selection of representative judges is rational. The biographical essays are done well. I recommend the book to those interested in the theory of appellate judging."--Merritt Lane, Jr., American Bar Association Journal
"An excellent work....A tour de force....As a concise, clearly articulated overview of the American judicial tradition, as a guide to the further study of judicial biography and American jurisprudence, the work is unrivalled."--CHOICE
"An outstanding book which reveals White as a major scholar on American jurisprudence....A major contribution to understanding the judicial process as it operates in the context of a changing nation."--Journal of American History
"No one can read this book without being vastly better informed, and it is so refreshing to read a critique of a long established institution which, without ignoring its defects, brings out its abiding strength."--Law Quarterly Review
"White has written a thoughtful and often provocative work that both synthesizes many recent contributions and suggests further lines of inquiry."--American Historical Review
"White...has written a superb book. [It] merits that expansive adjective on a host of counts....Few scholars are as well prepared and qualified as White to write about the nation's judicial tradition from such a perspective....He points with insight, clarity, and economy of language to the essentials of American judging."--Virginia Law Review

About G. Edward White (John B. Minor Professor of Law and History, the University of Virginia)

G. Edward White is John B. Minor Professor of Law and History at the University of Virginia and is the author of six books, including Patterns of American Legal Thought, Tort Law in America: An Intellectual History, Earl Warren: A Public Life, and The Marshall Court and Cultural Change, 1815-1835.