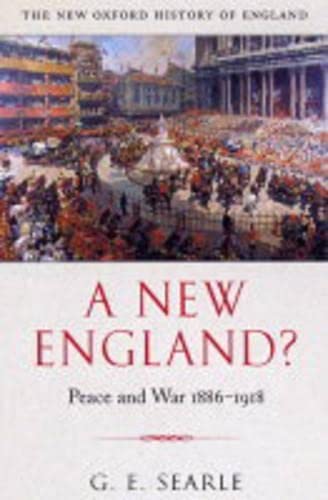 A New England?
by G.R. Searle

Out of Stock
£18.99
The book opens in 1886, as the Empire is poised to celebrate Victoria's golden jubilee, and ends in 1918 at the close of the 'war to end all wars', with England knowing that an era has conclusively ended. It portrays every aspect of the nation's life - political, social, and cultural.
Like New
Only 0 left

G. R. Searle's absorbing narrative history breaks conventional chronological barriers to carry the reader from England in 1886, the apogee of the Victorian era with the nation poised to celebrate the empress queen's golden jubilee, to 1918, as the 'war to end all wars' drew to a close leaving England to come to terms with its price - above all in terms of human life, but also in the general sense that things would never be the same again. This was an age of extremes: a period of imperial pomp and circumstance, with a political elite preoccupied with display and ceremony, alongside the growing cult of the simple life; the apogee of imperialism with its idealization of war on the one hand, the start of the Labour Party, a socialist renaissance, and welfare politics on the other; and a radical challenging of traditional gender stereotypes in the face of the prevailing cult of masculinity. Under Professor Searle's historical microscope, all the details of daily life spring into sharp relief. Half-forgotten figures such as Edward Carpenter, Vesta Tilley, and Edward Carson take their place on stage beside Oscar Wilde, the Pankhursts and Lloyd George. Motoring and aviation, to become such an intrinsic part of life within the next decades, had their beginnings in this period as pastimes for the rich. From the wretched slums of England's great cities to their bustling docks and factories, from the grand portals of Westminster to the violent political challenges of the Ulster Unionists and the militant suffrage movement, from Blackpool's tower and beach packed with holidaymakers to the trenches of the Western Front, the energy, creativity, and often destructive turmoil of the years 1886-1918 are brought into focus in this magisterial history. THE NEW OXFORD HISTORY OF ENGLAND The aim of the New Oxford History of England is to give an account of the development of the country over time. It is hard to treat that development as just the history which unfolds within the precise boundaries of England, and a mistake to suggest that this implies a neglect of the histories of the Scots, Irish, and Welsh. Yet the institutional core of the story which runs from Anglo-Saxon times to our own is the story of a state-structure built round the English monarchy and its effective successor, the Crown in Parliament. While the emphasis of individual volumes in the series will vary, the ultimate outcome is intended to be a set of standard and authoritative histories, embodying the scholarship of a generation.

This book deserves to become a standard work. It is reliable, lucid, even-handed and up-to-date ... Nowhere has Edwardian social history been so revealingly synthesised. * The Spectator *
A masterful, lucidly written and well proportioned survey over the whole range of national life. * Paul Smith, Times Literary Supplement *
This is a marvellous book in its breadth, its comprehensiveness and, given its length, the enormous pleasure it has been to read. Necessarily a work of synthesis, it efficiently weaves together telling quotes, examples and statistics to conjure up the late Victorian and Edwardian world. * Peter Catterall, History Today *

GOR010307037
A New England?: Peace and War 1886-1918 by G.R. Searle
G.R. Searle
New Oxford History of England
Used - Like New
Hardback
Oxford University Press
2004-03-25
974
019820714X
9780198207146
N/A
Book picture is for illustrative purposes only, actual binding, cover or edition may vary.
The book has been read, but looks new. The book cover has no visible wear, and the dust jacket is included if applicable. No missing or damaged pages, no tears, possible very minimal creasing, no underlining or highlighting of text, and no writing in the margins.