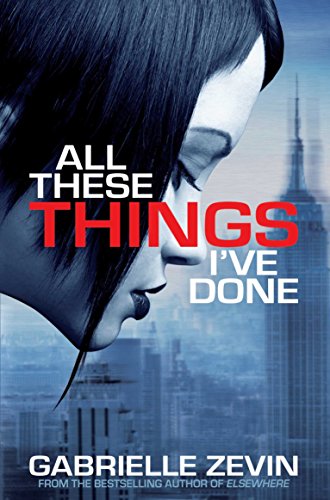 All These Things I've Done
by Gabrielle Zevin

In Stock
£3.99
The daughter of a mafia don falls for the son of the D.A. in a Godfather-inspired thriller set in a futuristic New York.
Very Good
Only 3 left

All These Things I've Done Summary

All These Things I've Done by Gabrielle Zevin

Sixteen year-old Anya's parents have been murdered because her father was the head of a notorious underworld gang. Now she is determined to keep herself and her siblings away from that world. But her father's relatives aren't so keen to let them go. When Anya's violent ex-boyfriend is poisoned with contaminated chocolate - chocolate that is produced illegally by Anya's criminal family - she is arrested for attempted murder. Disconcertingly, it is the new D.A. in town who releases her from jail, but her freedom comes with conditions. The D.A. is the father of Win, a boy at school to whom Anya feels irresistibly drawn. Win's father won't risk having his political ambitions jeopardised by his son seeing a member of a crime family. She is to stay away with him. Anya knows she risks her freedom and the safety of her brother and sister by seeing Win again. Neither the D.A. nor the underworld will allow it. But the feeling between them is so strong that she may be unable to resist him . . .

All These Things I've Done Reviews

"The love story's to die for, and the tangled web of relationships will keep readers intrigued to the last page." -"Kirkus Reviews"""

"The talented Zevin writes Anya and Win's high-wire romance as jolting for both the participants and readers." --"Booklist," starred review ..".the achingly realistic romance between this latter-day Romeo and Juliet, told in Anya's earnest voice, will attract readers as surely as chocolate attracts...mobsters." --"Horn Book Magazine"

"In Gabrielle Zevin's "All These Things I've Done," we fast-forward to 2083. Chocolate and coffee are contraband (can you imagine?!), paper and water are scarce, and New York is crawling with crime and poverty. But this is normal for sixteen-year-old Anya Balachine, daughter of the city's late crime boss. Until, that is, the chocolate her family manufactures accidentally poisons her ex and all fingers are pointed at her." -TeenVogue.com
"The love story's to die for, and the tangled web of relationships will keep readers intrigued to the last page." -"Kirkus Reviews
""Offering the excitement of a crime drama and the allure of forbidden roman

"Anya's attractive blend of strength and innocence makes her such a likable heroine. . . . The achingly realistic romance between this latter-day Romeo and Juliet, told in Anya's earnest voice, will attract readers as surely as chocolate attracts . . . mobsters." --"The Horn Book"

"Zevin excels at inviting readers into Anya's mafiya paranoia. . . . Anya is a likable character. . . . The love story's to die for, and the tangled web of relationships will keep readers intrigued to the last page." --"Kirkus Reviews"

"Offering the excitement of a crime drama and the allure of forbidden romance, this introduction to a reluctant Godfather-in-the making will pique the interest of dystopia-hungry readers." --"Publishers Weekly"

* "A work of powerful beauty. This inventive novel slices right to the bone of human yearning, offering up an indelible vision of life and death as equally rich sides of the same coin." --"Booklist," starred review

* "With an intriguing and well-developed premise, thoughtful characterization, and refreshing style, Zevin's poignant novel rewards readers with a view of death that celebrates the rich complexities of being alive." --"The Horn Book," starred review

* "Intriguing. Surely guides readers through the bumpy landscape of strongly delineated characters dealing with the most difficult issue that faces all of us. Provides much to think about and discuss." --"School Library Journal," starred review

"Zevin's touch is marvelously light even as she considers profundities, easily moving among humor, wisdom and lyricism. . . . No plot synopsis can convey what a rich, wise spell this book casts." --"The New York Times Book Review"

MEMOIRS OF A TEENAGE AMNESIAC

"Zevin is completely convincing on the intensity of early passion and the way it can evaporate in the rays of something new, and she has a light touch with the deceptively shallow anguish of adolescence." --"The New York Times Book Review"

Gabrielle Zevin is the bestselling author of Elsewhere. As well as writing fiction for adults and teenagers, she is also a screenwriter. Her books have been translated into eighteen languages. Gabrielle Zevin lives in New York. All These Things I've Done is the first part of an eagerly anticipated trilogy.

GOR003640475
All These Things I've Done by Gabrielle Zevin
Gabrielle Zevin
Birthright Trilogy
Used - Very Good
Paperback
Pan Macmillan
2012-03-29
368
033053789X
9780330537896
N/A
Book picture is for illustrative purposes only, actual binding, cover or edition may vary.
This is a used book - there is no escaping the fact it has been read by someone else and it will show signs of wear and previous use. Overall we expect it to be in very good condition, but if you are not entirely satisfied please get in touch with us.