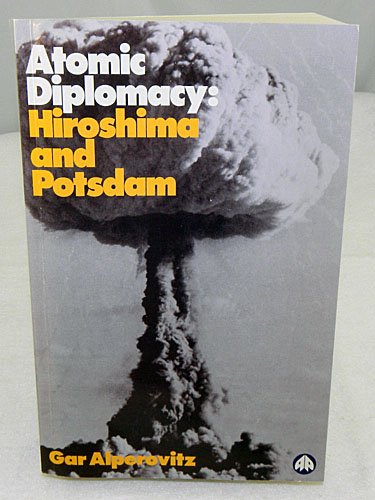 In Stock
£25.99
Important reading for anyone interested in the history - and future - of peace and war
Very Good
Only 1 left

This book provides important new evidence to support the thesis that the primary reason for bombing Hiroshima and Nagasaki was not to end the war in Japan, as was said at the time, but to `make the Russians more manageable'.

Drawing on recently released diaries and records of Truman, Eisenhower and others, Alperovitz re-evaluates the assumptions, hesitations and decisions that precipitated the use of atomic weapons and traces how possession of the bomb changed American strategy toward the Soviet Union at the Potsdam Conference and helped to set it on a course that contributed to the swift beginning of the Cold War.

Most historians of the period now agree that diplomatic considerations related to the Soviet Union played a major role in the decision to use the bomb. Atomic Diplomacy pioneered this new understanding. Today we still live in Hiroshima's shadow; this path breaking work is timely and urgent reading for anyone interested in the history - and future - of peace and war.

Gar Alperovitz is a historian and political economist and is President of the National Center for Economic Alternatives in Washington DC. He has been a fellow of Kings College Cambridge and the Kennedy Institute at Harvard. He has contributed to many publications including the New York Times, the Washington Post and the Nation. A BBC special on Alperovitz's work was screened 1989.

Author's Note Acknowledgments Introduction to the 1985 edition The Bombing of Hiroshima and Nagaski Preface 1. The Strategy of an Immediate Showdown 2. The Strategy of a Delayed Showdown 3. The Decision to Postpone a Confrontation with Stalin 4. The Far East and Two Faces of the Strategy of Delay 5. The Tactics of the Potsdam Conference (I) 6. The Tactics of the Potsdam Conference (II) 7. American Diplomacy Takes the Offensive 8. Conclusions Appendix I: A Note on the Historical Debate Over Questions Concerning Truman's 1945 Strategy of Delay Appendix II: Excerpts from a 1946 US Intelligence Report Appendix III: Stimson's Unsuccessful Attempt to Change the Strategy of Delay Before Leaving Office Appendix IV: 'Atomic Warfare and the Christian Faith': A Report from the Federal Council of Churches, 1946 Appendix V: Excerpts from 'The Challenge of Peace': National Conference of Catholic Bishops' Pastoral Letter on War and Peace, 1983 Bibliography of Important Sources Notes Index

GOR009949894
Atomic Diplomacy: Hiroshima and Potsdam by Gar Alperovitz
Gar Alperovitz
Used - Very Good
Hardback
Pluto Press
1994-08-01
414
0745309488
9780745309484
N/A
Book picture is for illustrative purposes only, actual binding, cover or edition may vary.
This is a used book - there is no escaping the fact it has been read by someone else and it will show signs of wear and previous use. Overall we expect it to be in very good condition, but if you are not entirely satisfied please get in touch with us.