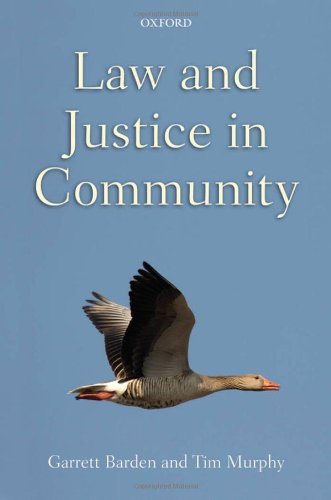 Law and Justice in Community
by Garrett Barden (Emeritus Professor of Philosophy at University College Cork, Ireland, and Visiting Professor of Law, University of Akureyri, Iceland)

In Stock
£47.99
This book offers an account of the nature of law that refutes modern, positivist theories and argues that law exists in all human communities before it is formally expressed. Drawing on anthropology and classical theory, the theory of law offered will be of interest to students of philosophy, anthropology, and the sociological study of law.
Good
Only 1 left

Law and Justice in Community Summary

Law and Justice in Community by Garrett Barden (Emeritus Professor of Philosophy at University College Cork, Ireland, and Visiting Professor of Law, University of Akureyri, Iceland)

This book proposes a general theory of the nature of law based on the idea that law exists in all human communities before it is ever posited or in any other sense formally expressed. According to the theory, the nature of law is not captured in what is variously called 'positive law', 'conventional law', 'state law' or 'human law'. The theory holds that a living law is an omnipresent feature of human community. By 'living law' is meant primarily those normative judgments and choices that are generally accepted and approved in a particular community. The book begins by exploring the origins of civil society and the function of law. The authors adopt the Roman law definition of justice as the willingness to give each what is due, and they examine the mutual rights or entitlements that must be for the most part honoured for any society to survive. In addition to distinguishing natural justice from conventional justice, and setting out in detail the distinction between distributive justice, rectificatory justice and reciprocal justice, the study analyses justice and the trading order; adjudication and interpretation; the relationship between morality, law and legislation; natural law; rights; law and coercion; and the authority and legitimacy of law. While the authors invoke several classical and medieval sources, their account of law and justice in community is innovative and contemporary. It will be of interest to students of philosophy, social anthropology, political science, and those involved in the jurisprudential or sociological study of law.

Law and Justice in Community Reviews

`The scope of content, the depth of research, and the comprehensive way in which the material is presented are to be commended. It certainly makes an important contribution to jurisprudence. But it is of wider interest, and the issues dealt with here are of concern to all people intent on living 'the good life'. Students and scholars from, in particular, law, philosophy, theology and political science will find this a helpful, challenging and informative read.' Suzanne Mulligan, Irish Theological Quarterly
`Overall, this is an ingenious and original book.' Jonathan Crowe, Ethics
`...a novel and signal contribution to jurisprudence. It addresses perennial concerns, such as the nature of law, obligation, authority, legitimacy, morality, and the natural law...Law and Justice in Community lies in a different intellectual tradition. It draws principally on the ideas of Aristotle and Aquinas, combined with an account of justice honed through a consideration of Roman law...Law and Justice in Community will enlighten and provoke in equal measure. For that, the authors are to be both thanked and applauded.' Oran Doyle. The Irish Jurist
`A thought- provoking book which sets out, on its own terms, to make an unconventional contribution to the debate about the nature of law. It is a pleasure to read an elaborate argument which the authors try to develop with care from their initial premises, controversial though these may be. This is a provocative and imaginative work that deserves to be read and pondered by anyone with an interest in theortetical inquiries about law.' Roger Cotterrell, International Journal of Law in Context
`While one of its manifest virtues is its careful scholarly precision, [Law and Justice in Community] manages to combine this with a comprehensive approach that is both exciting and persuasive. . If one were looking for sources for this approach, one would perhaps not be wrong in selecting the antecedently unlikely quartet of Hobbes, Aristotle, Hayek and Aquinas as being pre-eminent among those who inspire Professors Barden and Murphy. In the end, however, whatever they may have taken over from previous thinkers, or perhaps because of what has been taken, the authors' approach to their topic, without straining for novelty for novelty's sake, is distinctly original. This book should be read by anyone interested in jurisprudence or the philosophy of law and would provide valuable material to students of anthropology, history, sociology and political science.' Gerard Casey. International Journal of Philosophical Studies
`It is very informative to see the Aristotelian way of analyzing political and jurisprudential problems working from different premises than is ordinarily done. This book is both radical and traditional and it is splendidly argued. It deserves to be widely read and to be influential.' Gudmundur Heidar Frimansson, Nordicum-Mediterraneum
`The authors draw from disparate sources, historic and geographic, for conceptual inspiration and example. The authors' reliance on the Greeks and Romans and the work of Thomas Aquinas, and their resulting global approach to the theory of law, counterbalances the specificity of school into which jurisprudential enquiry has migrated. The authors do not proceed from an overly rigorous process of definition and methodology but from a common sense and learned approach drawn from their independent, clear-thinking reflection. As a consequence, those who do not agree with everything in the book will find much of value so far as the authors' intuitive analyses elucidate, correspond with, and broaden their own experience and views.' Diarmuid Rossa Phelan, Dublin University Law Journal

1. Introduction: The Grey Goose ; 2. The Origins of Civil Society and the Function of Law ; 3. Justice, Ownership, and Law ; 4. Natural Justice and Conventional Justice ; 5. Justice and the Trading Order ; 6. Adjudication and Interpretation ; 7. Morality, Law, and Legislation ; 8. Natural Law ; 9. Rights ; 10. The Force of Law ; 11. The Authority and Legitimacy of Law ; 12. Conclusion