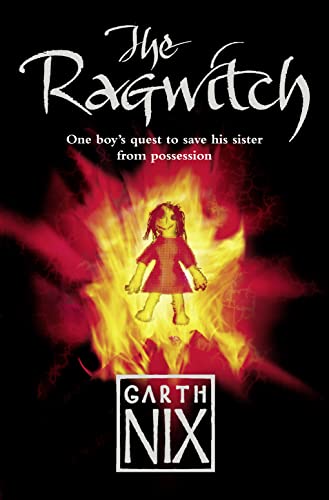 The Ragwitch
by Garth Nix

From the author of Abhorsen comes classic fantasy set in a world dominated by the Ragwitch, a being of sinister, destructive intent.

The Ragwitch by Garth Nix

From the author of Abhorsen comes classic fantasy set in a world dominated by the Ragwitch, a being of sinister, destructive intent.

An ancient spirit wreaks death and destruction on the world that sought to cripple her powers.

"Julia turned around - and Paul skidded to a stop in shock. He felt like he'd been winded, struck so hard he couldn't breathe at all. For the person in front of him wasn't Julia at all, but a hideous mixture of girl and doll: half flesh, half cloth, and the eyes and face had nothing of Julia left at all, only the evil features of the doll."

When Julia finds the ugly doll in the strange ball of feathers on the beach, Paul instinctively knows that his sister has meddled with something that is going to cause trouble. But already it's too late - the power behind the doll already has his sister in its thrall and, later that night, the Ragwitch claims Julia for its own.

Fighting against his natural urge to run from this hideous being, Paul is drawn into the creature's own world. Can he save his sister - or even himself?

"Sabriel is a winner, a fantasy that reads like realism. Here is a world with the same solidity and four-dimensional authority as our own, created with invention, clarity and intellience." Philip Pullman

"I think Garth Nix has created a really remarkable and persuasive wold, and done it in the grand style of high fantasy and heroic romance, with some wonderful twists and turns. His Sabriel is a heroine truly worthy of that role." Lloyd Alexander

"By turns rousing, charming and slyly funny, Sabriel is an engaging tale that slays sexual stereotypes along with its monsters." San Francisco Chronicle

"What makes LIRAEL a delight is the magic that Nix brings to his story and to his characters. It is filled with twists and turns, playful inventiveness and dark magic, and is sure to satisfy his many readers." Locus

Garth Nix was born in 1963 and grew up in Canberra, Australia. After taking his degree in professional writing from the University of Canberra, he worked in a bookshop and then moved to Sydney. There he sank lower into the morass of the publishing industry, steadily devolving from sales rep through publicist until in 1991 he became a senior editor with a major multinational publisher. After a period travelling in Eastern Europe, the Middle East and Asia in 1993, he left publishing to work as a marketing communications consultant . In 1999 he was lured back to the publishing world to become a part-time literary agent. He now lives in Sydney, a five-minute walk from Coogee Beach, with his wife Anna, son Thomas and lots of books.

GOR000463709
The Ragwitch by Garth Nix
Garth Nix
Used - Very Good
Paperback
HarperCollins Publishers
2005-08-01
400
0007174993
9780007174997
N/A
Book picture is for illustrative purposes only, actual binding, cover or edition may vary.
This is a used book - there is no escaping the fact it has been read by someone else and it will show signs of wear and previous use. Overall we expect it to be in very good condition, but if you are not entirely satisfied please get in touch with us.