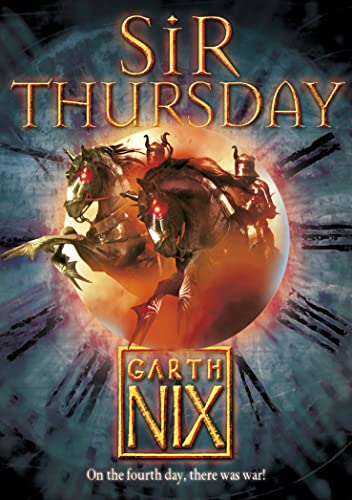 Get ready for more brilliant page-turning fantasy from master, Garth Nix. On the fourth day there was war! Pick up with Arthur Penhaligon as his Keys to the Kingdom adventures continue in the mysterious House.

Sir Thursday (The Keys to the Kingdom, Book 4) by Garth Nix

Get ready for more brilliant page-turning fantasy from master, Garth Nix. On the fourth day there was war! Pick up with Arthur Penhaligon as his Keys to the Kingdom adventures continue in the mysterious House.

Following their adventures in the Border Sea, Arthur and Leaf head for home. But only Leaf gets through the Front Door. Arthur is blocked because someone - or something - has assumed his identity and is taking over his life.

Before Arthur can take action, he is drafted by Sir Thursday and forced to join the Glorious Army of the Architect. The Army has its headquarters in the Great Maze, a defensive area of the House. Half of the Maze has already been dissolved by Nothing, and hordes of Nithlings emerge regularly to attack the rest. If the Nithling invasion can overcome the Army and the Great Maze, the House will be lost and the whole universe with it.

While Leaf tries to banish Arthur's doppelganger on earth, Arthur must survive his basic training, avoid getting posted to the Front and work out how he can free Part Four of the Will and gain the Fourth Key from Sir Thursday. If the latest, strongest and most dangerous Nithling offensive doesn't break through first...

"Nix's imagination is matched only by his prose style" The Times

GOR001013326
Sir Thursday (The Keys to the Kingdom, Book 4) by Garth Nix
Garth Nix
The Keys to the Kingdom
Used - Very Good
Paperback
HarperCollins Publishers
2006-02-27
432
0007175078
9780007175079
N/A
Book picture is for illustrative purposes only, actual binding, cover or edition may vary.
This is a used book - there is no escaping the fact it has been read by someone else and it will show signs of wear and previous use. Overall we expect it to be in very good condition, but if you are not entirely satisfied please get in touch with us.