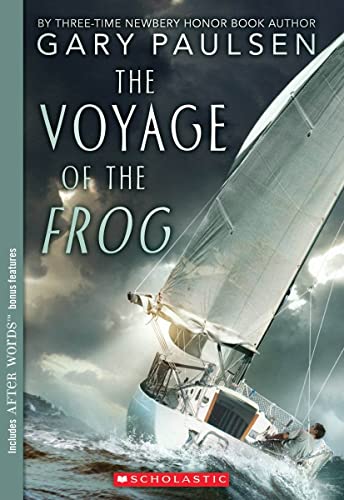 The Voyage of the Frog
by Gary Paulsen

The Voyage of the Frog Summary

The Voyage of the Frog by Gary Paulsen

This adventure novel about survival at sea by Newbery Honor author Gary Paulsen is now available in an After Words paperback edition!
David thought he was alone, that the ocean around him was all there was of the world. The wind screamed, the waves towered, and his boat, the twenty-two foot fiberglass FROG, skidded and bucked and, each moment, filled deeper and grew heavier with sea water.
David thought surely he was dead at fourteen. His uncle Owen, who had taught him about sailing safely, would be so angry. Owen had died only days ago, his last wish for David to take the FROG out on his own, and sail her beyond sight of the coast, and once there scatter Owen's ashes.

Gary Paulsen has written more than 175 books and some 200 articles and short stories for children and adults. He is considered one of the most important writers for young adults today. Three of his novels - HATCHET, DOGSONG, and THE WINTER ROOM - were Newbery Honor books, and his works frequently appear on the best books lists of the American Library Association.
Mr. Paulsen and his wife, Ruth Wright Paulsen, an artist who has illustrated several of his books, divide their time between their home in New Mexico, a boat in the Pacific, and adventures in the wilderness.

GOR008620354
The Voyage of the Frog by Gary Paulsen
Gary Paulsen
Apple (Scholastic)
Used - Very Good
Paperback
Unknown
0
0545085357
9780545085359
N/A
Book picture is for illustrative purposes only, actual binding, cover or edition may vary.
This is a used book - there is no escaping the fact it has been read by someone else and it will show signs of wear and previous use. Overall we expect it to be in very good condition, but if you are not entirely satisfied please get in touch with us.