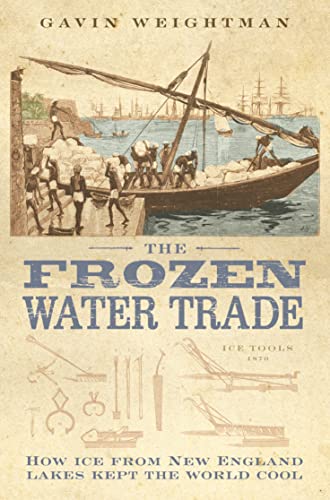 The story of the 19th-century ice trade, in which ice from the lakes of New England - valued for its incredible purity - revolutionised domestic life around the world.

The story of the 19th-century ice trade, in which ice from the lakes of New England - valued for its incredible purity - revolutionised domestic life around the world.

In the days before artificial refrigeration, it was thought impossible to transport ice for long distances. But one man, Frederic Tudor, was convinced it could be done. This is the story of how, almost single-handedly, and in the face of near-universal mockery, he established a vast industry that would introduce the benefits of fresh ice to large parts of the globe.

Thanks to Tudor, the American fashion for drinks `on the rocks' spread to tropical areas such as the West Indies and British India. By the 1830s fleets of schooners carried the frozen cargo, packed with sawdust and tarpaulins for insulation, to all corners of the world. The harvesting of the ice from New England's lakes employed thousands of men.

The frozen water trade had a profound influence on the tastes of a large part of the world, but with the development of artificial cooling systems in the first quarter of the 20th century, the huge industry established by Frederic Tudor vanished as if it had never been.

GOR001186299
The Frozen Water Trade by Gavin Weightman
Gavin Weightman
Used - Very Good
Paperback
HarperCollins Publishers
2003-03-17
224
0007102860
9780007102860
N/A
Book picture is for illustrative purposes only, actual binding, cover or edition may vary.
This is a used book - there is no escaping the fact it has been read by someone else and it will show signs of wear and previous use. Overall we expect it to be in very good condition, but if you are not entirely satisfied please get in touch with us.