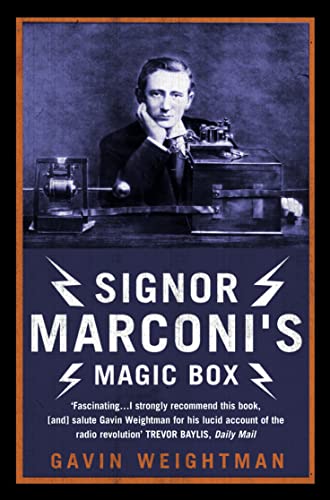 The intriguing story of how wireless was invented by Guglielmo Marconi - and how it amused Queen Victoria, saved the lives of the Titanic survivors, tracked down criminals and began the radio revolution.

The intriguing story of how wireless was invented by Guglielmo Marconi - and how it amused Queen Victoria, saved the lives of the Titanic survivors, tracked down criminals and began the radio revolution.

Wireless was the most fabulous invention of the 19th century: the public thought it was magic, the popular newspapers regarded it as miraculous, and the leading scientists of the day (in Europe and America) could not understand how it worked. In 1897, when the first wireless station was established by Marconi in a few rooms of the Royal Needles Hotel on the Isle of Wight, nobody knew how far these invisible waves could travel through the `ether', carrying Morse Coded messages decipherable at a receiving station. (The definitive answer was not discovered till the 1920s, by which time radio had become a sophisticated industry filling the airwaves with a cacaphony of sounds - most of it American.)

Marconi himself was the son of an Italian father and an Irish mother (from the Jameson whiskey family); he grew up in Italy and was fluent in Italian and English, but it was in England that his invention first caught on. Marconi was in his early twenties at the time (he died in 1937). With the `new telegraphy' came the real prospect of replacing the network of telegraphic cables that criss-crossed land and sea at colossal expense. Initially it was the great ships that benefited from the new invention - including the Titanic, whose survivors owed their lives to the wireless.

`Gavin Weightman brings alive the excitement and uncertainty of the early wireless experiments. His book cannot fail to spark the imagination of anyone wishing to comprehend the magnitude of the revolution brought about by wireless. It is an excellent read' New Scientist
'A fascinating story set in a fascinating period' Sunday Tribune (Dublin)
'Gavin Weightman's impeccably researched book is far more than a fact-led shunt through the Marconi story. His prose shimmers with the kind of romance that, in the mobile phone age, is quite difficult to grasp. But what a lovely story! An unassuming young chap confronts and defies the finest scientific minds in the world. It is pleasing to report that the cinematic aspect of this tale comes gloriously alive within Weightman's evocative, vividly detailed writing. Utterly captivating and, even for techno-dunces like myself, wholly illuminating' Manchester Evening News
'Fascinating...I strongly recommend this book, [and] salute Gavin Weightman for his lucid account of the radio revolution' Trevor Baylis, Daily Mail

Gavin Weightman is an experienced television documentary-maker (producer/director/writer), journalist and author of many books such as The Making of Modern London: 1815-1914, The Making of Modern London: 1914-1939, London River, Picture Post Britain and Rescue: A History of the British Emergency Services (Boxtree). His first book for HarperCollins, The Frozen Water Trade, was published in February 2002

GOR001113058
Signor Marconi's Magic Box: The invention that sparked the radio revolution by Gavin Weightman
Gavin Weightman
Used - Very Good
Paperback
HarperCollins Publishers
2004-03-15
336
0007130066
9780007130061
N/A
Book picture is for illustrative purposes only, actual binding, cover or edition may vary.
This is a used book - there is no escaping the fact it has been read by someone else and it will show signs of wear and previous use. Overall we expect it to be in very good condition, but if you are not entirely satisfied please get in touch with us.