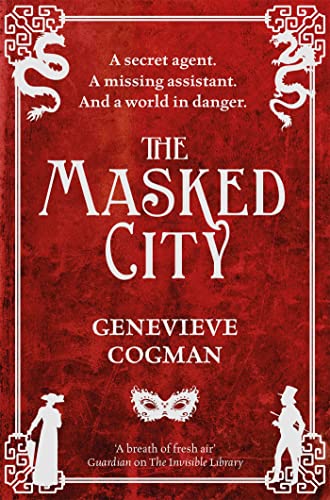 The Masked City
by Genevieve Cogman

The Masked City by Genevieve Cogman

The second title in Genevieve Cogman's The Invisible Library series, The Masked City is a wonderful read for all those who enjoyed Mr Penumbra's 24 hour Bookstore by Robin Sloan, Jasper Fforde's The Eyre Affair or Ben Aaronovitch's Rivers of London.

Librarian-spy Irene is working undercover in an alternative London when her assistant Kai goes missing. She discovers he's been kidnapped by the fae faction and the repercussions could be fatal. Not just for Kai, but for whole worlds.

Kai's dragon heritage means he has powerful allies, but also powerful enemies in the form of the fae. With this act of aggression, the fae are determined to trigger a war between their people - and the forces of order and chaos themselves.

Irene's mission to save Kai and avert Armageddon will take her to a dark, alternate Venice where it's always Carnival. Here Irene will be forced to blackmail, fast talk, and fight. Or face death.

A book very much in the humorous and satirical tradition of Discworld * Guardian *
The Masked City is a joy to read and Cogman makes it look effortless. She knows her characters, understands how to pace the action and the world she has built is intricate and compelling. Lovers of literature will adore this universe . . . You simply can't get more fun than this * SciFiNow *

Genevieve Cogman started on Tolkien and Sherlock Holmes at an early age, and has never looked back. But on a perhaps more prosaic note, she has an MSC in Statistics with Medical Applications and has wielded this in an assortment of jobs: clinical coder, data analyst and classifications specialist. Although The Invisible Library was her debut novel, she has also previously worked as a freelance roleplaying game writer. She is also the author of The Masked City and The Burning Page, both in The Invisible Library series. Genevieve Cogman's hobbies include patchwork, beading, knitting and gaming, and she lives in the north of England.

GOR007198486
The Masked City by Genevieve Cogman
Genevieve Cogman
The Invisible Library series
Used - Very Good
Paperback
Pan Macmillan
2015-12-03
368
1447256255
9781447256250
N/A
Book picture is for illustrative purposes only, actual binding, cover or edition may vary.
This is a used book - there is no escaping the fact it has been read by someone else and it will show signs of wear and previous use. Overall we expect it to be in very good condition, but if you are not entirely satisfied please get in touch with us.