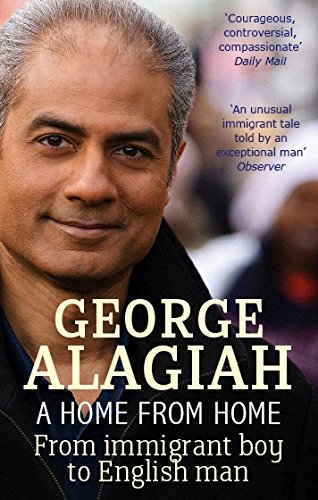 A Home From Home
by George Alagiah

In Stock
£10.99
* George Alagiah's moving autobiography of his own immigrant life, and a wider examination of the immigrant experience in the UK
Very Good
Only 1 left

A Home From Home Summary

A Home From Home: From Immigrant Boy to English Man by George Alagiah

When George Alagiah was dropped off at a Hampshire boarding school as a child back in 1967 he was confronted with an extreme version of the private struggle faced by all immigrants - the battle to leave the past behind and fit into a new culture.

His arrival in Britain coincided with the unhappy intrusion of race into politics. A key part of the ensuing fight against racism was the concept of multiculturalism. But in a closely argued and forthright chapter, Alagiah suggests that, far from improving the prospects for some immigrants, multiculturalism may be an impediment to integration. All too often these are the poor and isolated communities who most need the help of the state to break out of what is fast becoming a version of ghetto life.

Above all, this book is a tender and evocative portrayal of the immigrant experience. Alagiah brings colour and life to a subject that is too often reduced to screaming tabloid headlines, and sheds light on the controversial question of British identity.

A Home From Home Reviews

George Alagiah is a widely praised journalist who works for the BBC. He lives in Stoke Newington in North London with his wife and two children.

GOR001397548
A Home From Home: From Immigrant Boy to English Man by George Alagiah
George Alagiah
Used - Very Good
Paperback
Little, Brown Book Group
2007-07-05
288
0349119112
9780349119113
N/A
Book picture is for illustrative purposes only, actual binding, cover or edition may vary.
This is a used book - there is no escaping the fact it has been read by someone else and it will show signs of wear and previous use. Overall we expect it to be in very good condition, but if you are not entirely satisfied please get in touch with us.