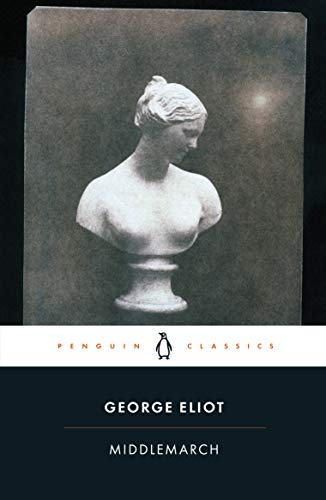 Out of Stock
£5.49
Features Dorothea Brooke, a young idealist whose search for intellectual fulfilment leads her into a disastrous marriage to the pedantic scholar Casaubon; and the charming but tactless Dr Lydgate, whose marriage to the spendthrift beauty Rosamund and pioneering medical methods threaten to undermine his career.
Like New Very Good Good Well Read
Only 0 left

George Eliot's masterpiece, groundbreaking in its psychological insight into powerful clashes of obligation and desire, Middlemarch is edited with notes and an introduction by Rosemary Ashton in Penguin Classics.

George Eliot's most ambitious novel is a masterly evocation of diverse lives and changing fortunes in a provincial English community prior to the Reform Bill of 1832. Peopling its landscape are Dorothea Brooke, a young idealist whose search for intellectual fulfilment leads her into a disastrous marriage to the pedantic scholar Casaubon; the charming but tactless Dr Lydgate, whose marriage to the spendthrift beauty Rosamund and pioneering medical methods threaten to undermine his career; passionate, idealistic and penniless artist Will Ladislaw; and the religious hypocrite Bulstrode, hiding scandalous crimes from his past. As their stories interweave, George Eliot creates a richly nuanced and moving drama.

This edition uses the text of the second edition of 1874. In her introduction, Rosemary Ashton, biographer of George Eliot, discusses the themes of change in Middlemarch, and examines the novels as an imaginative embodiment of Eliot's humanist beliefs.

Mary Ann Evans (1819-80) began her literary career as a translator and later editor of the Westminster Review. In 1857, she published Scenes of Clerical Life, the first of eight novels she would publish under the name of 'George Eliot', including The Mill on the Floss, Middlemarch, and Daniel Deronda.

'No Victorian novel approaches Middlemarch in its width of reference, its intellectual power, or the imperturbable spaciousness of its narrative'
V. S. Pritchett

"The most profound, wise and absorbing of English novels...and, above all, truthful and forgiving about human behavior." -- Hermione Lee

Mary Ann Evans (George Eliot) (1819-80) was a philosopher, journalist and translator before she became a novelist, her first stories being published in 1856. She led an unconventional life, co-editing the liberal journal Westminster Review for three years and living with the married man and philosopher George Henry Lewes. Her novels are among the greatest of the nineteenth century