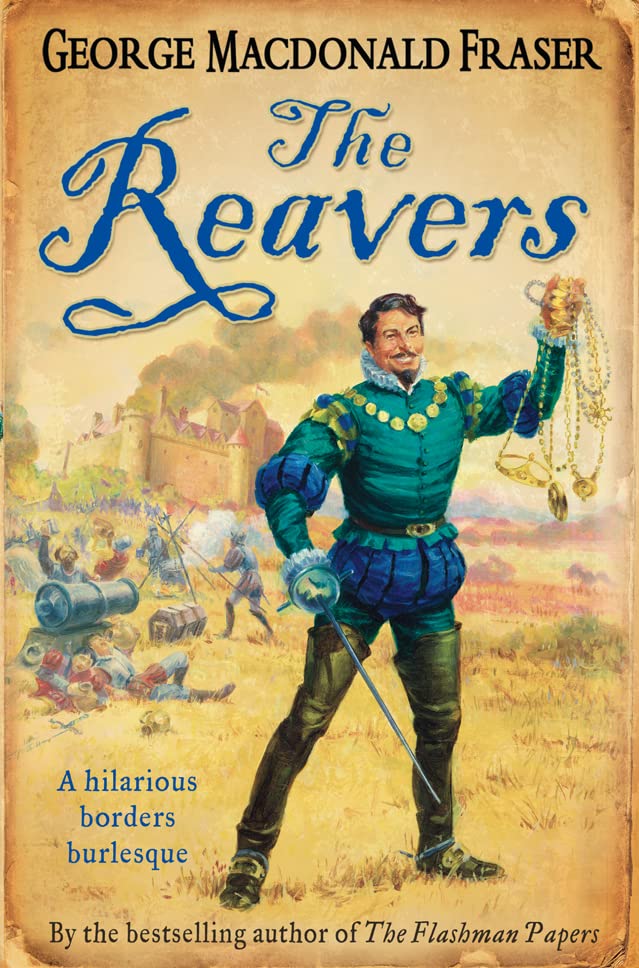 The Reavers
by George MacDonald Fraser

Elizabethan England, and a dastardly Spanish plot to take over the throne is uncovered. It's up to Agent Archie Noble to save Queen and country in this saucy and swashbuckling romp from the bestselling author of The Flashman Papers and The Pyrates.

The Reavers by George MacDonald Fraser

Elizabethan England, and a dastardly Spanish plot to take over the throne is uncovered. It's up to Agent Archie Noble to save Queen and country in this saucy and swashbuckling romp from the bestselling author of The Flashman Papers and The Pyrates.

Spoiled, arrogant, filthy rich, and breathtakingly beautiful, the young Lady Godiva Dacre is exiled from the court of Good Queen Bess (who can't abide red-haired competition) to her lonely estate in distant Cumberland, where she looks forward to bullying the peasantry and getting her own imperious way. Little does she guess that the turbulent Scottish border is the last place for an Elizabethan heiress, beset by ruthless reivers (many of them unshaven), blackmailing ruffians, fiendish Spanish plotters intent on regime change and turning Merrie England into a ghastly European Union province.

And no one to rely on but her half-witted blonde school chum, a rugged English superman with a knack for disaster, and a dashing highwayman who looks like Errol Flynn but has a Glasgow accent. To say nothing of warlocks, impersonators, taxi-drivers riding brooms, burlesque artists, the drunkest man in Scotland, and several quite normal characters - oh, yes, gossips, it's all happening in The Reavers, a moral tale obviously conceived in some kind of fit by Flashman author George MacDonald Fraser ... well, he's getting on, and was bound to crack eventually. He admits (nay, insists) that it's a crazy story for readers who love fun for its own sake.

Praise for `The Reavers'

`The Reavers is farcical, nonesensical and great fun...entertaining stuff and acutely observed even if it is utterly bonkers.'

`...a welcome reminder of a prolific, playful talent...extremely silly, but it is silliness of a superior kind.'
Seven

'A welcome reminder of a prolific, playful talent'
Seven

`Entertaining stuff and actutely observed'
News of the World

Praise for `Flashman on the March':

'The Flashman Papers do what all great sagas do - winning new admirers along the way but never, ever betraying old ones. It is an immense achievement' Sunday Telegraph

'In our crass, humourless, anaemic, politically correct age, there could be no better tonic or treat than the outrageous Flashy's bold descriptions of action in battle or bedroom. To relish George MacDonald Fraser is to rediscover the joy of reading' Daily Telegraph

`Everything we expect from a Flashman adventure is here: lechery, double-crossing, real people, the epic poltroonery from which Flashman emerges as saviour of the hour...my one complaint about the series - surely the great mock-historical romp of the past half-century - is that MacDonald Fraser does not add to it often enough' Mail on Sunday

The author of the famous `Flashman Papers' and the `Private McAuslan' stories, George MacDonald Fraser has worked on newspapers in Britain and Canada. In addition to his novels he has also written numeous films, most notably `The Three Musketeers', `The Four Musketeers', and the James Bond film, `Octopussy'. George Macdonald Fraser died in January 2008 at the age of 82.

GOR000624609
The Reavers by George MacDonald Fraser
George MacDonald Fraser
Used - Very Good
Paperback
HarperCollins Publishers
2008-06-02
240
0007253842
9780007253845
N/A
Book picture is for illustrative purposes only, actual binding, cover or edition may vary.
This is a used book - there is no escaping the fact it has been read by someone else and it will show signs of wear and previous use. Overall we expect it to be in very good condition, but if you are not entirely satisfied please get in touch with us.