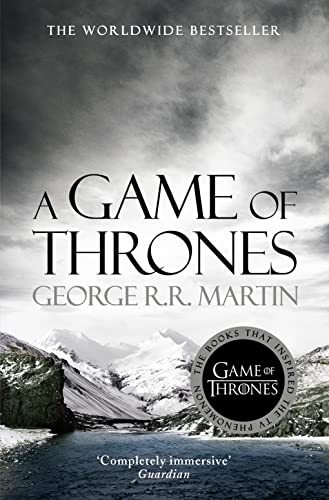 A Game of Thrones by George R.R. Martin

A Game of Thrones (A Song of Ice and Fire, Book 1) by George R.R. Martin

'When you play the game of thrones, you win or you die. There is no middle ground'

Summers span decades. Winter can last a lifetime. And the struggle for the Iron Throne has begun.

From the fertile south, where heat breeds conspiracy, to the vast and savage eastern lands, all the way to the frozen north, kings and queens, knights and renegades, liars, lords and honest men . . . all will play the Game of Thrones.

'It has captured the imaginations of millions for the same reason the archetypal dramas of Homer, Sophocles or Shakespeare have lasted for milennia'
Guardian

'What an epic journey. I just love the whole concept' Martina Cole

'When times are tough, there is no better distraction than these magical tales' Guardian

'Complex storylines, fascinating characters, great dialogue, perfect pacing, and the willingness to kill off even his major characters' LA Times

'Mr Martin is a literary dervish, bursting with the wild vision of the very best tale tellers' New York Times

George R.R. Martin is the author of fourteen novels, including five volumes of A SONG OF ICE AND FIRE, several collections of short stories and numerous screen plays for television drama and feature films. He lives in Santa Fe, New Mexico.

GOR005659255
9780007548231
0007548230
A Game of Thrones (A Song of Ice and Fire, Book 1) by George R.R. Martin
George R.R. Martin
A Song of Ice and Fire
Used - Very Good
Paperback
HarperCollins Publishers
2014-03-27
912
N/A
Book picture is for illustrative purposes only, actual binding, cover or edition may vary.
This is a used book - there is no escaping the fact it has been read by someone else and it will show signs of wear and previous use. Overall we expect it to be in very good condition, but if you are not entirely satisfied please get in touch with us
Trustpilot