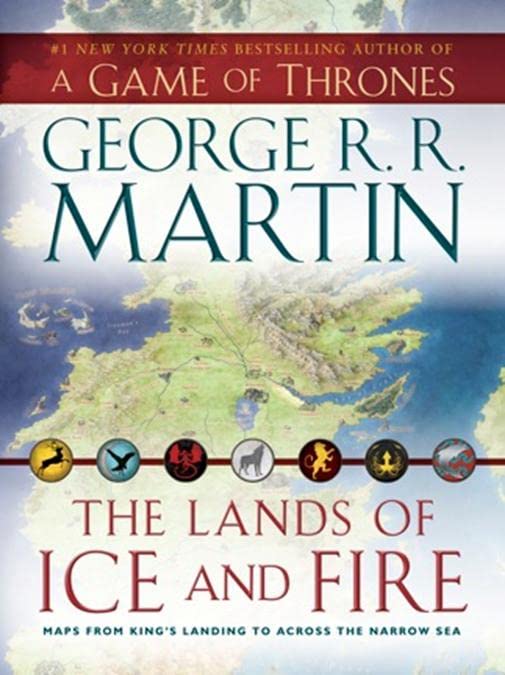 The Lands of Ice and Fire
by George R. R. Martin

A dazzling set of maps, featuring original artwork from illustrator and cartographer Jonathan Roberts, transforms Martin's epic saga into a world as fully realized as the one around us.

The Lands of Ice and Fire Summary

The Lands of Ice and Fire by George R. R. Martin

A dazzling set of maps, featuring original artwork from illustrator and cartographer Jonathan Roberts, transforms Martin's epic saga into a world as fully realized as the one around us.

George R. R. Martin's beloved Song of Ice and Fire series, which started with A Game of Thrones, is bursting with a variety and richness of landscapes - from bitter tundra to arid wasteland and everything in between - that provide a sense of scale unrivalled in contemporary fantasy.

The centrepiece of this gorgeous map collection is guaranteed to be a must-have for any fan: the complete map of the known world, joining the lands of the Seven Kingdoms and the lands across the Narrow Sea for the first time in series history. But this is just one of many unique maps that aren't available anywhere else. There is an alternate version that tracks the movements of the series' protagonists throughout their vast world, along with more detailed versions of the western, middle, and eastern thirds of the world; a full map of Westeros, combining North and South; one of the Dothraki Sea and the Red Wastes; and the Braavos city map. And here, too, are fan favourites detailing everything from urban sprawl to untamed wilds: maps of King's Landing; The Wall and Beyond the Wall; the Free Cities; and Slaver's Bay, Valyria, and Sothyros.

Never before has the entire scope of Martin's universe been so exhaustively and fascinatingly depicted. The maps in this beautiful, one-of-a-kind atlas will enrich your reading or viewing experience, provide another view of your favourite characters' epic journeys, and open up captivating new worlds - plus, they'll look great on any castle wall.

The Lands of Ice and Fire Reviews

Praise for A Song of Ice and Fire

'After five volumes Martin is, if anything, a better writer than when he started. If you're watching A Game of Thrones on HBO, you're foregoing the great pleasure of Martin's deft prose...'
Time Magazine

'A Game of Thrones has captured the imaginations of millions for the same reason the archetypal dramas of Homer, Sophocles or Shakespeare have lasted for millennia. They show us the conflict between self-sacrifice and self-interest, between the human spirit and the human ego, between good and evil. And when we look up from the page we recognise those same conflicts in the world around us and in ourselves'
The Guardian

'Colossal, staggering... Martin captures all the intoxicating complexity of the Wars of the Roses or Imperial Rome in his imaginary world... one of the greats of fantasy literature.'
SFX

'Fantasy literature has never shied away from grandeur, but the sheer-mind-boggling scope of this epic has sent other fantasy writers away shaking their heads... Its ambition: to construct the Twelve Caesars of fantasy fiction, with characters so venomous they could eat the Borgias.'
Guardian

'Such a splendid tale. I couldn't stop till I'd finished and it was dawn.'
Anne McCaffrey

Jonathan Roberts grew up in a old farmhouse between a ruined castle and a Bronze Age fort, so lands of the imagination were never far away. These days Roberts illustrates maps of real and imaginary worlds for a wide range of clients, from brides looking for an unusual wedding map to Wizards of the Coast and IDW comics for the many lands of Dungeons and Dragons. Along with his own illustration work for books and games, Roberts has curated New York gallery shows of maps by illustrators around the world.

GOR004687461
The Lands of Ice and Fire by George R. R. Martin
George R. R. Martin
Used - Very Good
Hardback
HarperCollins Publishers
2012-11-01
2
0007490658
9780007490653
N/A
Book picture is for illustrative purposes only, actual binding, cover or edition may vary.
This is a used book - there is no escaping the fact it has been read by someone else and it will show signs of wear and previous use. Overall we expect it to be in very good condition, but if you are not entirely satisfied please get in touch with us.