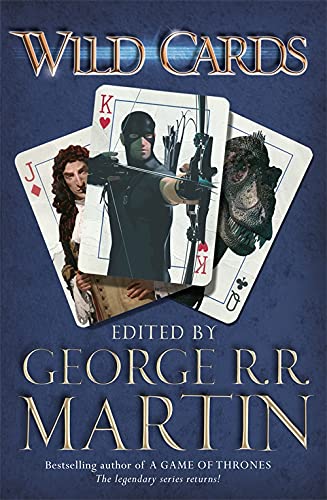 In Stock
£2.99
The return of the famous shared-world superhero books created and edited by George R. R. Martin, author of A GAME OF THRONES!
Very Good Good
9 in stock

The return of the famous shared-world superhero books created and edited by George R. R. Martin, author of A GAME OF THRONES

There is a secret history of the world - a history in which an alien virus struck the Earth in the aftermath of World War II, endowing a handful of survivors with extraordinary powers. Some were called Aces - those with superhuman mental and physical abilities. Others became Jokers - cursed with bizarre mental or physical disabilities. Some turned their talents to the service of humanity. Others used their powers for evil. Wild Cards is their story.

George R.R. Martin published his first story in 1971 and quickly rose to prominence, winning four Hugo andf two Nebula Awards in quick succession before he turned his attention to fantasy with the historical horror novel FEVRE DREAM, now a Fantasy Masterwork. Since then he has won every major award in the fields of fantasy, SF and horror. His magnificent epic saga A SONG OF ICE AND FIRE is redefining epic fantasy for a new generation. George R.R. Martin lives in New Mexico.

GOR004795779
Wild Cards by George R. R. Martin
George R. R. Martin
Used - Very Good
Paperback
Orion Publishing Co
2012-11-08
576
0575134119
9780575134119
N/A
Book picture is for illustrative purposes only, actual binding, cover or edition may vary.
This is a used book - there is no escaping the fact it has been read by someone else and it will show signs of wear and previous use. Overall we expect it to be in very good condition, but if you are not entirely satisfied please get in touch with us.