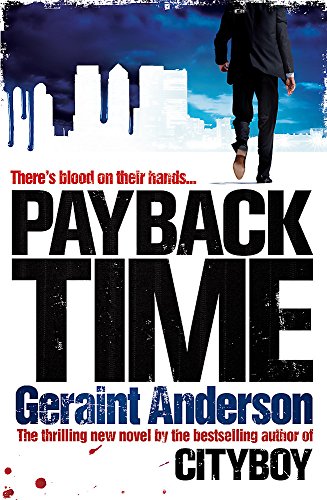 The compelling thriller from Geraint Anderson, bestselling author of CITYBOY and JUST BUSINESS.

When City high-flyer Bridget, recently fired from her bank, is found dead outside her high rise apartment, her colleagues assume she's committed suicide.

Cityboy Steve Jones is outraged and he and his City workmates decide to take revenge. They hatch an ingenious plan to sabotage her firm and succeed in bringing it to its knees. After wildly celebrating their success, Bridget's boyfriend Fergus insists they take down a much more prominent bank. But soon the gang are being targeted by the police and financial regulators. There must be a rat in their midst but, if so, who?

Steve investigates and digging deeper realises he could be on the trail of a murderer. Suddenly there's a distinct possibility that an even bigger revenge is being planned and this time the pay back is heading in his direction...

'If you liked CITYBOY, you'll love this. It's engaging, witty and suspenseful. As bold and innovative as its author, JUST BUSINESS takes the reader on a breath-taking guided tour of cocaine blizzards, bankers' drafts, and emotional whirlwinds. I could put it down but not until long after I'd finished it. It's first class' * Howard Marks *
As a primer to back-stabbing, bullying, drug-taking, gambling, boozing, lap-dancing, this takes some beating ... a necessary and valuable book * Evening Standard *
Engaging, timely and important * Times *
His timing couldn't be better ... London's pernicious financial world reveals itself in all its ugliness * Daily Mail *
'Excruciatingly candid' * Sunday Times *

Before sacrificing his soul to dark forces in the Square Mile, Cityboy was a genuine left-wing hippy and political activist, complete with ponytail and hoop earrings. His dream of becoming a global traveller was cruelly dashed when his brother got him an interview at a French bank in the City, which would set him on the rocky road to destruction and despair.

GOR004713306
Payback Time by Geraint Anderson
Geraint Anderson
Used - Very Good
Paperback
Headline Publishing Group
2013-02-14
336
0755381777
9780755381777
N/A
Book picture is for illustrative purposes only, actual binding, cover or edition may vary.
This is a used book - there is no escaping the fact it has been read by someone else and it will show signs of wear and previous use. Overall we expect it to be in very good condition, but if you are not entirely satisfied please get in touch with us.