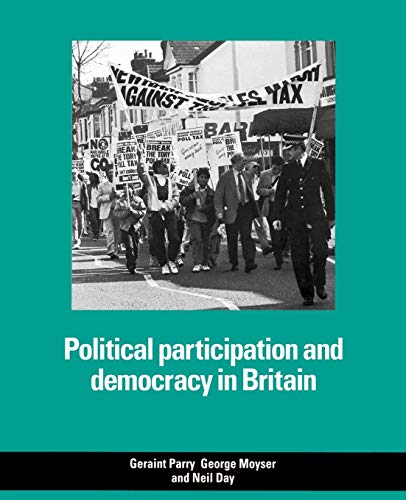 Political Participation and Democracy in Britain
by Geraint Parry

In Stock
£5.99
This book presents of one of the most extensive surveys ever undertaken on the levels and patterns of political involvement in Britain. The authors find higher levels of political participation, particularly at a local level, than previous research has revealed.
Very Good Good
Only 4 left

Political Participation and Democracy in Britain by Geraint Parry

Why do some people involve themselves in politics and others not? Which issues are they concerned with? What do they get out of it? Answering such questions is fundamental to understanding political life and the workings of liberal democracies. This book presents the results of one of the most extensive surveys ever undertaken on the levels and patterns of political involvement in Britain. It is based on the findings of a sample survey of nearly 1,600 people across England, Scotland and Wales as well as a further 1,600 men and women and nearly 300 leaders in six specially selected and contrasting communities. These people were asked about the extent to which they had taken political action, particularly at a local level, and the authors found higher levels of participation than previous research has revealed. They analyse these findings in terms of age, gender, social class and education and look at the reactions of local leaders to the efforts people make to influence them.

"This long-awaited 'big publication' from the poltical participation study of 1984-1985, financed by the Economic and Social Research Council of Britain, will not disappoint most of its academic audience....All in all, students of political participation and democracy across the globe have a lot to learn from reading this book." Donley T. Studlar, source???
"So general a description does not do justice to the wealth of information and analysis that the authors provide." American Political Science Review
"This book has many strengths that deserve to make it a standard work in the field. It tries to set out a coherent picture of what circumstances lead which people to participate, how, and with what results. In the process it tells us much about British politics and adds greatly to the study of political participation in general. This is an ambitious project and some shortcomings are inevitable; but the book's achievements far outweigh its shortcomings....All-in-all a very impressive piece of research...." Mark N. Franklin, British Politics Group Newsletter

GOR001191134
Political Participation and Democracy in Britain by Geraint Parry
Geraint Parry
Used - Very Good
Paperback
Cambridge University Press
1992-01-16
528
0521336023
9780521336024
N/A
Book picture is for illustrative purposes only, actual binding, cover or edition may vary.
This is a used book - there is no escaping the fact it has been read by someone else and it will show signs of wear and previous use. Overall we expect it to be in very good condition, but if you are not entirely satisfied please get in touch with us.