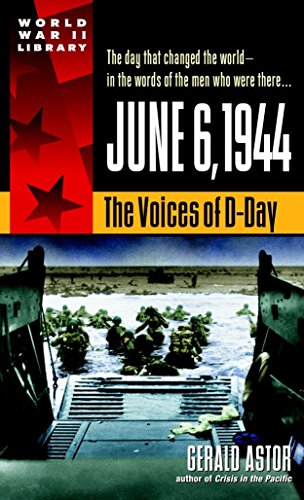 In Stock
£4.49
In the spring of 1944, 120,000 Allied soldiers crossed the English Channel in the most ambitious invasion force ever assembled.
Very Good Good Well Read
Only 1 left

In the spring of 1944, 120,000 Allied soldiers crossed the English Channel in the most ambitious invasion force ever assembled. Rangers, paratroopers, infantry, and armored personnel, these soldiers - some who had just cut their teeth in Africa and Sicily and some who were brand-new to war - joined a force aimed at the heart of Europe and Hitler's defenses. On the morning of June 6, D-Day began. And in the hours that followed, thousands lost their lives, while those who survived would be changed forever No other chronicle of D-Day can match Gerald Astor's extraordinary work - a vivid first-person account told with stunning immediacy by the men who were there. From soldiers who waded through the bullet-riddled water to those who dropped behind enemy lines, from moments of terror and confusion to acts of incredible camaraderie and heroism, June 6, 1944 plunges us into history in the making - and the most pivotal battle ever waged.

"No one does oral history better than Gerald Astor."
-Stephen Ambrose

Gerald Astor is a World War II veteran and award-winning journalist and historian whose articles have appeared in the New York Times, Playboy, and Esquire. He is also the author of A Blood-Dimmed Tide: The Battle of the Bulge by the Men Who Fought It and Operation Iceberg: The Invasion and Conquest of Okinawa in World War II. He makes his home in Scarsdale, New York.