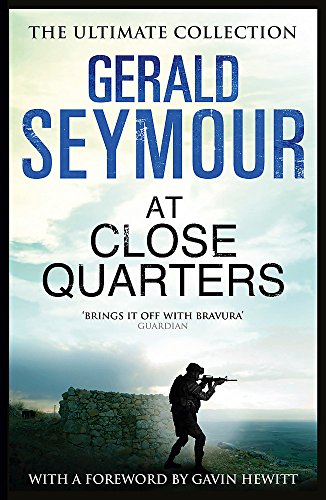 At Close Quarters by Gerald Seymour

A superb thriller from the bestselling author of Harry's Game.

At Close Quarters by Gerald Seymour

Peter Holt, a young diplomat, witnesses the horrific murder of his fiance and the British Ambassador within days of a new posting to the Soviet Union. The report of the murder lands on the desk of a British Intelligence officer who suspects Palestinian involvement, althought the Russians insist that it was not a terrorist attack.

The British government are determined to extract revenge and Holt is the only man able to identify the assassin. He is sent to the Lebanon and the perilous Beqa'a Valley, which serves as a stronghold for the most extreme guerilla groups. Unauthorised access to the valley is virtually impossible, and capture by the Syrian Army would result in torture and death. His only company is Noah Crane, an Israeli expert sniper, who acts as his mentor and guide. But when Syrian Intelligence learn of their presence, their cover is blown. And now it is too late to turn back.

A high-class thriller, grounded in reality and as taut as a bowstrong * Daily Telegraph *
Don't rush through this well-crafted adventure story; if you do, you'll miss savouring the sheer pleasure of fine writing and an intricate plot so skillfully woven that every development falls believable into place * Sunday Times *
Gerald Seymour exploded onto the literary scene in 1975 with the massive bestseller HARRY'S GAME. The first major thriller to tackle the modern troubles in Northern Ireland, it was described by Frederick Forsyth as 'like nothing else I have ever read' and it changed the landscape of the British thriller forever. Gerald Seymour was a reporter at ITN for fifteen years. He covered events in Vietnam, Borneo, Aden, the Munich Olympics, Israel and Northern Ireland. He has been a full-time writer since 1978.
GOR006358307
9781444760194
144476019X
At Close Quarters by Gerald Seymour
Gerald Seymour
Used - Very Good
Paperback
Hodder & Stoughton General Division
2014-03-27
352
N/A
Book picture is for illustrative purposes only, actual binding, cover or edition may vary.
This is a used book - there is no escaping the fact it has been read by someone else and it will show signs of wear and previous use. Overall we expect it to be in very good condition, but if you are not entirely satisfied please get in touch with us
Trustpilot