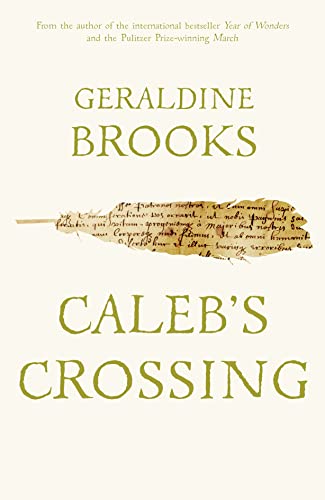 The new novel from Pulitzer Prize-winner Geraldine Brooks, author of the Richard and Judy bestseller `March', `Year of Wonders' and `People of the Book'.

The new novel from Pulitzer Prize-winner Geraldine Brooks, author of the Richard and Judy bestseller `March', `Year of Wonders' and `People of the Book'.

Caleb Cheeshateaumauk was the first native American to graduate from Harvard College back in 1665. `Caleb's Crossing' gives voice to his little known story. Caleb, a Wampanoag from the island of Martha's Vineyard, seven miles off the coast of Massachusetts, comes of age just as the first generation of Indians come into contact with English settlers, who have fled there, desperate to escape the brutal and doctrinaire Puritanism of the Massachusetts Bay colony.

The story is told through the eyes of Bethia, daughter of the English minister who educates Caleb in the Latin and Greek he needs in order to enter the college. As Caleb makes the crossing into white culture, Bethia finds herself pulled in the opposite direction. Trapped by the narrow strictures of her faith and her gender, she seeks connections with Caleb's world that will challenge her beliefs and set her at odds with her community.

Praise for `People of the Book' :

'Brooks expertly guides us to the conclusion that the world is made up of only two types of people: those who would destroy books and those who would give their lives to save them. This illuminating novel, like its predecessor, is well worthy of both Pulitzer and prime-time approbation.' Independent on Sunday

'These stories have a raw and visceral power. The book is full of historical detail.' Naomi Alderman, F.T. Magazine

'An irresistible subject, given urgency by its timeliness and poignancy by its paradoxicality: for the novel is based on the true story of an ancient Jewish codex saved from the fire by a Muslim librarian. Her performance will satisfy many readers.' Guardian

Geraldine Brooks is the author of three novels, the Pulitzer Prize-winning March and the international bestsellers People of the Book and Year of Wonders. She has also written the acclaimed non fiction works Nine Parts of Desire and Foreign Correspondence. Born and raised in Australia, she lives on Martha's Vineyard with her husband, Tony Horwitz, and their two sons.

GOR002793736
Caleb's Crossing by Geraldine Brooks
Geraldine Brooks
Used - Very Good
Hardback
HarperCollins Publishers
2011-04-28
320
0007333536
9780007333530
N/A
Book picture is for illustrative purposes only, actual binding, cover or edition may vary.
This is a used book - there is no escaping the fact it has been read by someone else and it will show signs of wear and previous use. Overall we expect it to be in very good condition, but if you are not entirely satisfied please get in touch with us.