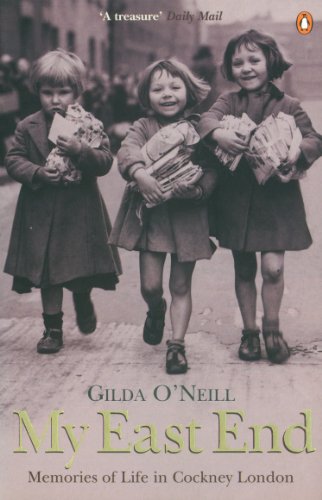 My East End
by Gilda O'Neill

In Stock
£3.99
London's East End is a place that is at once appealing and unruly, comforting and incomprehensible. This title traces the East End of London - cockneys, criminals, street markets, pub singalongs, dog racing, and jellied eels.
Very Good Good
18 in stock

My East End: Memories of Life in Cockney London by Gilda O'Neill

London's East End it is a place at once appealing and unruly, comforting and incomprehensible. Gilda O'Neill, an East Ender herself shows there is more to this fascinating area than a collection of cliched images. Using oral history and more traditional sources she builds up a powerful image of this community - bringing to us, with wit and honesty, the real story of London's East End.

'Every page is a delight. Every chapter made vivid by a writer who has poured heart and soul into her book' Daily Mail

'A rich tapestry... a finely detailed examination of our not so distant past. Her book is as much a piece of history as the accounts it contains' Time Out

Gilda O'Neill was born and brought up in the East End. She left school at fifteen but returned to education as a mature student. She wrote full-time and continued to live in the East End with her husband and family. Sadly she died on 24 September 2010 after a short illness.

Gilda O'Neill grew up in the East End of London. Having left school aged fifteen, she later returned to education as a mature student and went on to take three university degrees. Since 1990 she has been writing full-time and has published numerous works of both fiction and non-fiction, including two non-fiction bestsellers, My East End and Our Street. Gilda O'Neill is married with two grown-up children and lives in the East End.

GOR000432160
My East End: Memories of Life in Cockney London by Gilda O'Neill
Gilda O'Neill
Used - Very Good
Paperback
Penguin Books Ltd
2000-09-28
384
0140259503
9780140259506
N/A
Book picture is for illustrative purposes only, actual binding, cover or edition may vary.
This is a used book - there is no escaping the fact it has been read by someone else and it will show signs of wear and previous use. Overall we expect it to be in very good condition, but if you are not entirely satisfied please get in touch with us.