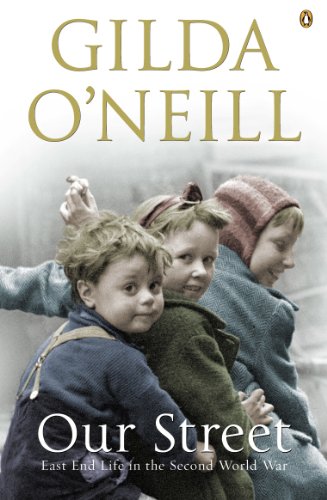 Our Street
by Gilda O'Neill

In Stock
£5.49
A companion volume to O'Neill's previous work, 'My East End', this book focuses exclusively on the oral testimony of East Londoners as they tell their own funny, sad, hopeful and sometimes shocking stories of what it was like to live in our street.
Good
Only 2 left

Our Street: East End Life in the Second World War by Gilda O'Neill

Gilda O'Neill's Our Street focuses on the lives of Londoners in the East End during the Second World War.

Showing the concerns, hopes and fears of these so-called 'ordinary people' Our Street illustrates these times by looking at the every day rituals which marked the patterns of daily life during WWII. It is an important book and also an affectionate record of an often fondly remembered, more communal, way of life that has all but disappeared.

'Every page is a delight. Every chapter made vivid by a writer who has poured heart and soul into her book' Daily Mail

'A rich tapestry... a finely detailed examination of our not so distant past. Her book is as much a piece of history as the accounts it contains' Time Out

Gilda O'Neill was born and brought up in the East End. She left school at fifteen but returned to education as a mature student. She wrote full-time and continued to live in the East End with her husband and family. Sadly she died on 24 September 2010 after a short illness.

Gilda O'Neill grew up in the East End of London. Having left schoold aged fifteen, she later returned to education as a mature student and went on to take three university degrees. Since 1990 she has been writing full-tiem and has published ten novels and to non-fiction works. Gilda O'neill is married with two grown-up children and lives in the East End.

GOR000572978
Our Street: East End Life in the Second World War by Gilda O'Neill
Gilda O'Neill
Used - Good
Paperback
Penguin Books Ltd
2004-07-01
352
0141000465
9780141000466
N/A
Book picture is for illustrative purposes only, actual binding, cover or edition may vary.
This is a used book - there is no escaping the fact it has been read by someone else and it will show signs of wear and previous use. Overall we expect it to be in very good condition, but if you are not entirely satisfied please get in touch with us.