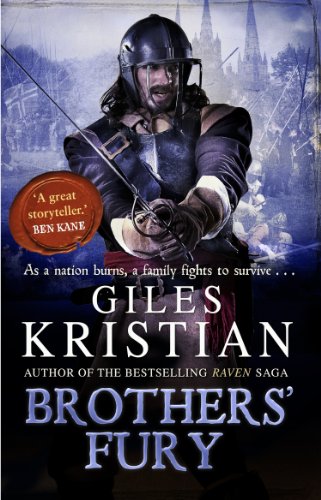 FROM THE SUNDAY TIMES BESTSELLING AUTHOR OF LANCELOT

Rebel Tom Rivers has been rejected by both his family and his commanding officer.

FROM THE SUNDAY TIMES BESTSELLING AUTHOR OF LANCELOT

Rebel Tom Rivers has been rejected by both his family and his commanding officer. But spymaster Captain Crafte sees in the young hothead a fearlessness that could be used to strike at the very heart of the Royalist cause.

Renegade Raw with grief at the death of his father, Edmund Rivers has rejected the peace talks between Parliament and the King. Now he leads a band of ruthless marauders against the rebels. However, Prince Rupert, recognising a kindred spirit, has other, no less daring plans.

Huntress Heart broken by the deaths that surround her, Bess Rivers bravely leaves her infant son and Sheer House to go in search of the one person who might help her douse the flames of her brothers' fury. . .

The second novel in Giles' acclaimed Bleeding Land series, Brothers' Fury is a powerful and thrilling novel of family turmoil and civil war.

Giles Kristian does it again: another surge of hope and fury, of passion, cannon fire and musketry to blow you away and leave you reeling in its wake. Fantastic, powerful, blood-stirring stuff... done with such panache, such daring, such glory that you'll be aching for the next installment. -- MANDA SCOTT
This is enthralling, excellently researched and lyrically imagined. Honour, duty, selfishness and terror - you can't get better ingredients for a good book. -- ROBERT LOW, bestselling author of the 'Oathsworn' Viking series
A rip-roaring sequel to The Bleeding Land . . . well drawn, and the language and social norms of the time are used to good effect. * SOLDIER magazine *

Family history (he is half Norwegian) and his storytelling hero, Bernard Cornwell, inspired Giles Kristian to write his first historical novels, the bestselling Raven Viking trilogy - Blood Eye, Sons of Thunder and Odin's Wolves. For his next series, he turned to the English Civil War. The Bleeding Land and Brothers' Fury follow the fortunes of a divided family against the complex and brutal backcloth of that conflict before returning to the world of the Vikings with the acclaimed God of Vengeance. Giles lives in Leicestershire. His website is www.gileskristian.com

GOR006734784
Brothers' Fury by Giles Kristian
Giles Kristian
The Bleeding Land
Used - Very Good
Paperback
Transworld Publishers Ltd
2015-04-23
480
0552162418
9780552162418
N/A
Book picture is for illustrative purposes only, actual binding, cover or edition may vary.
The book has been read but remains in clean condition. All pages are intact and the cover is intact. Some minor wear to the spine.