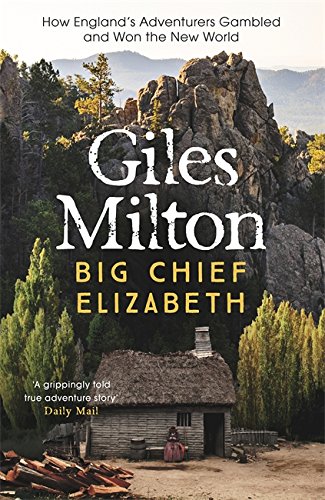 In Stock
£4.49
Bestselling author of NATHANIEL'S NUTMEG, Giles Milton takes us on another fascinating and extraordinary historical adventure.
Very Good
9 in stock

In April 1586, Queen Elizabeth I acquired a new and exotic title. A tribe of North American Indians had made her their weroanza - 'big chief'.

The news was received with great joy, both by the Queen and her favourite, Sir Walter Ralegh. His first American expedition had brought back a captive, Manteo, whose tattooed face had enthralled Elizabethan London. Now Manteo was returned to his homeland as Lord and Governor. Ralegh's gamble would result in the first English settlement in the New World, but it would also lead to a riddle whose solution lay hidden in the forests of Virginia.

A tale of heroism and mystery, BIG CHIEF ELIZABETH is illuminated by first-hand accounts to reveal a remarkable and long-forgotten story.

Like Giles Milton's previous book, ... Big Chief Elizabeth is a cracking read, a successful attempt at popular history * Evening Standard *
'It's almost impossible to summarise Milton's book, from which marvellous, vivid stories spill out like swagsack booty. ... Milton is a very contemporary historian' Guardian
'The story of the first Virginia colonies, now told in pacy style in Big Chief Elizabeth, is stirring and fitfully tragic...This is a marvellous story well retold' Sunday Times
Milton is a great storyteller ... he sets about filling in the historical gaps with relish, using his considerable imagination to conjure mood from dry parchment * Sunday Express *
Grippingly told true adventure story * Daily Mail *
Milton ... draws a vivid picture of the terrible hardships the settlers endured * The Times *
'Milton knits together the most vivid anecdotes and descriptions from a very colourful literature of exploration and colonization, and anyone wanting easy access to them has it here'. * The Times Literary Supplement *
Milton has a terrific eye for the kind of detail that can bring the past vividly to life off the page * The Spectator *
Splendid stuff ... fascinatingly told ... An excellent book * Time Out *
A wonderfully colourful story told with pace and verve * Sunday Telegraph *

Giles Milton is a writer and historian. He is the internationally bestselling author of Nathaniel's Nutmeg, Big Chief Elizabeth, The Riddle and the Knight, White Gold, Samurai William, Paradise Lost, Wolfram and Russian Roulette. He has also written three novels and three children's books. His books have been translated into twenty languages. He lives in south London. Find out more about Giles and his books on his website, www.gilesmilton.com, and Wikipedia page, http://en.wikipedia.org/wiki/Giles_Milton, follow him on Twitter at twitter.com/survivehistory and like him on Facebook at facebook.com/pages/Giles-Milton-Writer/121068034610842.

GOR000386153
Big Chief Elizabeth: How England's Adventurers Gambled and Won the New World by Giles Milton
Giles Milton
Used - Very Good
Paperback
Hodder & Stoughton General Division
2001-02-24
432
0340748826
9780340748824
N/A
Book picture is for illustrative purposes only, actual binding, cover or edition may vary.
This is a used book - there is no escaping the fact it has been read by someone else and it will show signs of wear and previous use. Overall we expect it to be in very good condition, but if you are not entirely satisfied please get in touch with us.