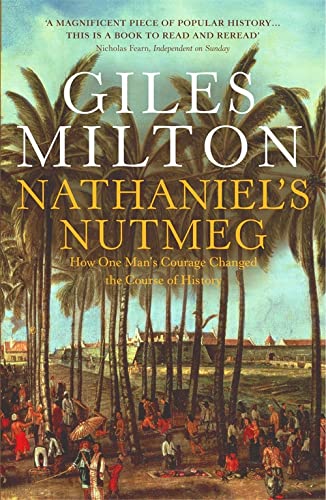 In Stock
£4.49
The extraordinary adventure-filled story of how England came to own Manhattan in the seventeenth century
Very Good Good
23 in stock

Nathaniel's Nutmeg: How One Man's Courage Changed the Course of History by Giles Milton

In 1616, an English adventurer, Nathaniel Courthope, stepped ashore on a remote island in the East Indies on a secret mission - to persuade the islanders of Run to grant a monopoly to England over their nutmeg, a fabulously valuable spice in Europe. This infuriated the Dutch, who were determined to control the world's nutmeg supply. For five years Courthope and his band of thirty men were besieged by a force one hundred times greater - and his heroism set in motion the events that led to the founding of the greatest city on earth.

A beautifully told adventure story and a fascinating depiction of exploration in the seventeenth century, NATHANIEL'S NUTMEG sheds a remarkable light on history.

A magnificent piece of popular history . . . This is a book to read, reread, then read again to your children * Nicholas Fearn, Independent on Sunday *
Beautifully touching ... To write a book that makes the reader sit in a trance, lost in his passionate desire to pack a suitcase and go to the fabulous place - that, in the end, is something one would give a sack of nutmeg for. * Philip Hensher, The Spectator *
Giles Milton tells his adventurous and sometimes grisly tale with relish ... The thoroughness and intelligence of his research underpins the lively confidence with which he deploys it. * John Spurling, Times Literary Supplement *
A truly gripping tale... His research is impeccable... Once embarked upon the journey of the book, one is loath, sometimes unable... to turn back and abandon it. * Martin Booth, The Sunday Times *
Milton has a terrific eye for the kind of detail that can bring the past vividly to life * The Spectator *

Giles Milton is a writer and journalist. He has contributed articles for most of the British national newspapers as well as many foreign publications and specialises in the history of travel and exploration. In the course of his researches, he has travelled extensively in Europe and the Middle East.

GOR000368280
Nathaniel's Nutmeg: How One Man's Courage Changed the Course of History by Giles Milton
Giles Milton
Used - Very Good
Paperback
Hodder & Stoughton General Division
1999-12-11
400
0340696761
9780340696767
N/A
Book picture is for illustrative purposes only, actual binding, cover or edition may vary.
This is a used book - there is no escaping the fact it has been read by someone else and it will show signs of wear and previous use. Overall we expect it to be in very good condition, but if you are not entirely satisfied please get in touch with us.