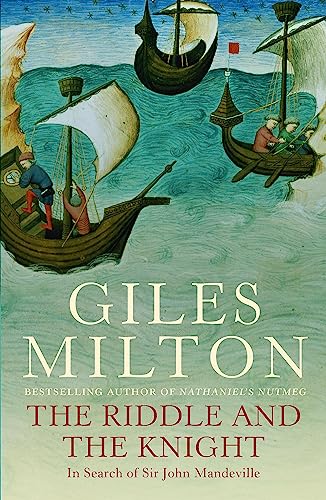 The Riddle and the Knight
by Giles Milton

In Stock
£3.59
Bestselling author Giles Milton takes us on an extraordinary journey and uncovers the answer to one of greatest historical riddles
Very Good
Only 3 left

The Riddle and the Knight Summary

The Riddle and the Knight: In Search of Sir John Mandeville by Giles Milton

In 1322 Sir John Mandeville left England on a pilgrimage to Jerusalem. Thirty-four years later, he returned, claiming to have visited not only Jerusalem, but India, China, Java, Sumatra and Borneo as well.

His book about that voyage, THE TRAVELS, was heralded as the most important book of the Middle Ages as Mandeville claimed his voyage proved it was possible to circumnavigate the globe.

In the nineteenth century sceptics questioned his voyage, and even doubted he had left England.

THE RIDDLE AND THE KNIGHT sets out to discover whether Mandeville really could have made his voyage or whether, as is claimed, THE TRAVELS was a work of imaginative fiction. Bestselling historian Giles Milton unearths clues about the journey and reveals that THE TRAVELS is built upon a series of riddles which have, until now, remained unsolved.

The Riddle and the Knight Reviews

Milton is a great storyteller ... he sets about filling in the historical gaps with relish, using his considerable imagination to conjure mood from dry parchment * Sunday Express *
Grippingly told true adventure story * Daily Mail *
'Milton has a terrific eye for the kind of detail that can bring the past vividly to life'. * The Spectator *

Giles Milton is a writer and historian. He is the internationally bestselling author of Nathaniel's Nutmeg, Big Chief Elizabeth, The Riddle and the Knight, White Gold, Samurai William, Paradise Lost, Wolfram and Russian Roulette. He has also written three novels and three children's books. His books have been translated into twenty languages. He lives in south London. Find out more about Giles and his books on his website, www.gilesmilton.com, and Wikipedia page, http://en.wikipedia.org/wiki/Giles_Milton, follow him on Twitter at twitter.com/survivehistory and like him on Facebook at facebook.com/pages/Giles-Milton-Writer/121068034610842.

GOR000386019
The Riddle and the Knight: In Search of Sir John Mandeville by Giles Milton
Giles Milton
Used - Very Good
Paperback
Hodder & Stoughton General Division
2001-10-04
304
0340819456
9780340819456
N/A
Book picture is for illustrative purposes only, actual binding, cover or edition may vary.
This is a used book - there is no escaping the fact it has been read by someone else and it will show signs of wear and previous use. Overall we expect it to be in very good condition, but if you are not entirely satisfied please get in touch with us.